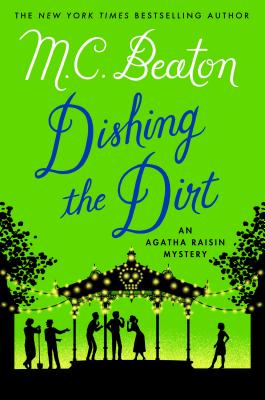 When therapist Jill Davent moved to the village of Carsely, Agatha Raisin was not a fan. Not only was this therapist romancing Agatha's ex-husband but she dug up details of Agatha's not-too-glamorous origins. Jill also counsels a woman, Gwen Simple, that Agatha firmly believes assisted her son in some grisly murders, although there is no proof. Not one to keep her feelings to herself, Agatha tells anyone that would listen that Jill is a charlatan and better off dead. Agatha could only sigh with relief when the therapist took an office in Mircester.

When Agatha learns that Jill had hired a private detective to investigate her background, she barges into Jill's office and gives her a piece of her mind, yelling "I could kill you!" So when Jill is found strangled to death in her office two days later, Agatha becomes the prime suspect. But Agatha, along with her team of private detectives, is determined to prove her innocence and find the real culprit. This time Agatha must use her skills to save her own skin.

“As always, M. C. Beaton presents us with an Agatha Raisin who manages to infuriate, amuse and solicit our deepest sympathies as we watch her blunder her way boldly through another murder mystery.” —Bookreporter.com on Hiss and Hers

“I know I once vowed to read only Agatha Christie for a year, but I've cheated. My No. 1 mistress: M.C. Beaton and her Agatha Raisin whodunits. Agatha is like Miss Marple with a drinking problem, pack-a-day habit, and major man lust.” —Entertainment Weekly on A Spoonful of Poison

M. C. Beaton, who was the British guest of honor at Bouchercon 2006, has been hailed as the "Queen of Crime" (The Globe and Mail). In addition to her New York Times and USA Today bestselling Agatha Raisin novels—now a hit show on Acorn TV and public television—Beaton is the author of the Hamish Macbeth series and many Edwardian mysteries. Born in Scotland, she currently divides her time between the English Cotswolds and Paris.
Loading...
or
Not Currently Available for Direct Purchase