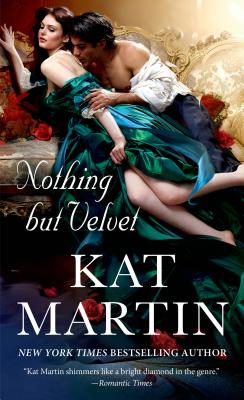 Nothing But Velvet (Litchfield)

From the glittering ballrooms to the scaffold's dark shadow,
Lovely Velvet Moran has renounced all thoughts of love. To save her family from ruin, she will wed the hard-faced Duke of Carlyle. But instead of becoming a nobleman's bride, Velvet finds herself a notorious highwayman's prize-her resolve to escape his forest lair warring with the wicked heat sparked by his caresses.

the path of temptation keeps unfolding...
Falsely branded a murderer, Jason Sinclair has secretly returned to clear his name and stop the wedding that would deny him his stolen dukedom. In an outlaw masquerade, he'll kidnap this sensuous minx and detain her as long as is necessary. But can he bridle the surge of passion that has captured his soul...and could imperil them both?


Praise For Nothing But Velvet (Litchfield)…

“Kat Martin shimmers like a bright diamond in the genre.” —Romantic Times

Kat Martin’s bestselling novels include Nothing But Velvet, Innocence Undone, and the Raines of Wind Canyon Series—Against the Wind, Against the Fire, and Against the Law. Her book Silk and Steel was nominated for a RITA Award. She is a graduate of the University of California, where she majored in Anthropology and History, a background that helped to develop her interest in the past. "I love anything old," she says. "I especially love to visit the settings for my books. My husband and I often stay in out-of-the-way inns and houses built in times past. It's fun and it gives a wonderful sense of a bygone era." Before becoming a writer, Martin was a real estate broker. She lives with her husband, author Larry Jay Martin, in Missoula, Montana.
Loading...
or
Not Currently Available for Direct Purchase