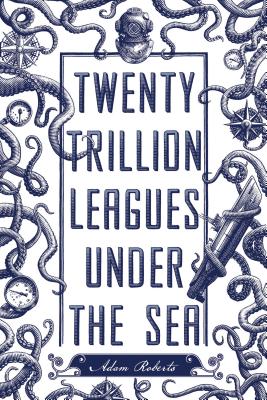 Twenty Trillion Leagues Under the Sea

Adam Roberts's Twenty Trillion Leagues Under the Sea revisits Jules Verne's classic novel in a collaboration with the illustrator behind a recent highly acclaimed edition of The Hunting of the Snark
It is 1958 and France's first nuclear submarine, Plongeur, leaves port for the first of its sea trials. On board, gathered together for the first time, are one of the Navy's most experienced captains and a tiny skeleton crew of sailors, engineers, and scientists. The Plongeur makes her first dive and goes down, and down and down. Out of control, the submarine plummets to a depth where the pressure will crush her hull, killing everyone on board, and beyond. The pressure builds, the hull protests, the crew prepare for death, the boat reaches the bottom of the sea and finds nothing. Her final dive continues, the pressure begins to relent, but the depth gauge is useless. They have gone miles down. Hundreds of miles, thousands, and so it goes on. Onboard the crew succumb to madness, betrayal, religious mania, and murder. Has the Plongeur left the limits of our world and gone elsewhere?

ADAM ROBERTS is a writer of sci-fi novels and stories, as well as Professor of Nineteenth-century Literature in English at Royal Holloway, University of London. Salt, Gradisil and Yellow Blue Tibia were nominated for the Arthur C. Clarke Award. By Light Alone has been shortlisted for the 2012 BSFA Award.

MAHENDRA SINGH is a freelance illustrator whose Melville House illustrated edition of The Hunting of the Snark was praised by Library Journal, The New Yorker, Salon.com, and Shelf Awareness.
Loading...
or
Not Currently Available for Direct Purchase