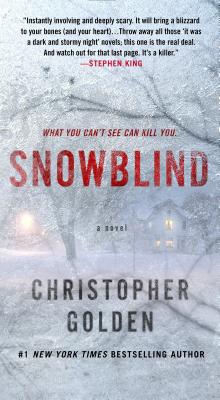 ONE SMALL, NEW ENGLAND TOWN IS TAKEN BY STORM—AND NOTHING WILL EVER BE THE SAME.

Once upon a time, Coventry weathered a horrific blizzard, one that left many people dead—and others mysteriously lost. Twelve years later, the town is still haunted by the snow that fell that one fateful night…and now a new storm is on the way.

Photographer Jake Schapiro mourns the little brother he lost in the storm and, this time, he will see another boy go missing. Mechanic and part-time thief Doug Manning, whose wife was never found after she wandered into the whiteout, is starting over with another woman—and more ambitious crimes. Police detective Joe Keenan has never been the same since that night, when he failed to save the life of a young boy…and the boy's father vanished in the storm only feet away. And all the way on the other side of the country, Miri Ristani receives a phone call—from a man who died twelve years ago. Old ghosts are trickling back to life as a new threat rolls in. Could it be that this storm will be even more terrifying than the last?

"Horror fiction is starting to make a comeback…writers like Christopher Golden are a big part of the reason."—George R. R. Martin, New York Times bestselling author of Game of Thrones
"A ghost-house thrill-ride…A great read for a winter night, or any night."—John Ajvide Lindqvist, author of Let the Right One In


Praise For Snowblind: A Novel…

“Instantly involving and deeply scary. It will bring a blizzard to your bones (and your heart) even in the middle of July. Throw away all those old ‘it was a dark and stormy night' novels; this one is the real deal. And watch out for that last page. It's a killer.” —Stephen King

“A breathless [read]…Great fodder for a dark and snowy night.” —Booklist

“Golden's Snowblind is an ethereal and nightmarish contemporary fairy tale. By turns horrific, moving, and ultimately redemptive, it's a hell of a ride.” —David S. Goyer, screenwriter, The Man of Steel and (story) The Dark Knight Rises

“A ghost-house thrill-ride in the shape of a snowstorm, within the confines of a book. A great read for a winter night, or any night.” —John Ajvide Lindqvist, author of Let the Right One In

“Horror with heart, Snowblind reminded me of classic Dean Koontz--the world is our own, the characters as knowable as our closest friends, but their adventures something altogether different, and altogether compelling. Christopher Golden writes with grace and beauty even while putting a chill to your spine. Read this and you'll never again peer through windswept snow without wondering what's behind it, I promise you.” —Michael Koryta

CHRISTOPHER GOLDEN is the award-winning, bestselling author of such novels as The Myth Hunters, The Boys Are Back in Town, Strangewood, and Of Saints and Shadows. He co-wrote the lavishly illustrated novel Baltimore, or, The Steadfast Tin Soldier and the Vampire with Mike Mignola, and the comic book series featuring the same character.
Loading...
or
Not Currently Available for Direct Purchase