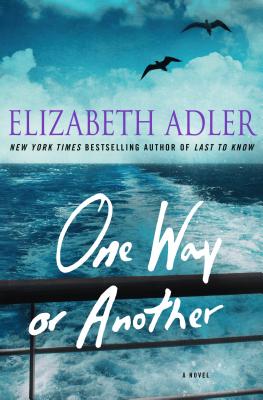 One Way or Another (Hardcover)

What begins as a beautiful evening at a party on a yacht ends with attempted murder...and a quest for revenge...

One moment Angie Morse is standing on the deck of a large luxury yacht and the next she feels a stinging blow to her head from a champagne bottle wielded by a beautiful woman. And then a push. She is in the water. She can see people on the yacht, but they don't seem to notice that she is gone, and all seem to have deliberately turned their backs as the yacht begins to slowly pull away from her. These are her friends, and one is her love. Two had a reason for getting rid of her, though she would never have thought it would come to this. Until now.

Revenge burns so deeply inside her that she knows she will survive somehow. She will get them. One way or another.

Told with Elizabeth Adler's trademark attention to luxurious detail of people and places, One Way or Another is a glamorous, twisty novel of vengeance and vindication.

ELIZABETH ADLER is the internationally acclaimed author of more than twenty novels, including The Charmers and One Way or Another. She lives in Palm Springs, CA.

Praise For One Way or Another: A Novel…

“This fast-paced mystery is filled with intriguing suspects and intensely portrayed family dynamics. Harry is a fascinating lead character who manages to be larger-than-life, yet has down-to-earth vulnerabilities, and he owns a dog that will steal readers' hearts.” —RT Book Reviews on Last to Know

“If anyone can combine romance with a creepy CSI-style serial-killer plot, it's Adler.” —Booklist on Please Don't Tell

“A sexy, scintillating caper.” —Booklist on From Barcelona with Love

“A summer treat.” —People magazine on It All Began in Monte Carlo

“The perfect beach read for mystery lovers.” —Booklist on One of Those Malibu Nights

“A top-notch romantic thriller.” —Library Journal on Now or Never

“Film noir on silk sheets.” —Kirkus Reviews on All or Nothing