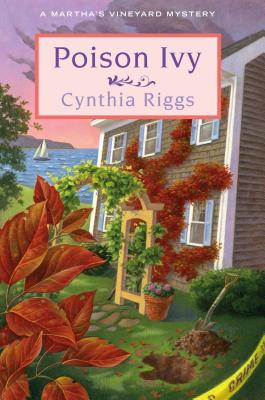 On her first day as adjunct professor at Ivy Green College, Victoria Trumbull recognizes the stench emanating from her classroom as more than just dead mice. Brownie, the groundskeeper's mangy mutt, soon discovers a second body hiding beneath a cluster of poison ivy.

The stakes have never been higher for Ivy Green, which is on the brink of losing already-lukewarm support from its accredited partner, Cape Cod University. Thackery Wilson, the founder of Ivy Green, worries that the bad publicity from the murders will obliterate the financial and academic support the tiny college and its dependent students desperately need. As the bodies continue to pile up, all tenure committee members, Victoria and Brownie find themselves hunting a serial killer and trying to save the college.

This charming 11th entry in Cynthia Rigg's Martha's Vineyard mystery series brings the island to life with a cast of eccentric characters led by a unique and endearing sleuth.

“Delightful...a cozy that celebrates the springtime beauty of the island as well as its quirky, endearing residents.” —Publishers Weekly on Touch-Me-Not

“Riggs’ character development and her lovely descriptions will have readers longing for both a trip to Martha’s Vineyard and the next book in the series.” —Booklist on Death and Honesty

“Lovely descriptions of the Vineyard in the fall, plenty of suspenseful action and a cast of eccentric supporting characters...help make this another winner.” —Publishers Weekly on Indian Pipes

“There are many levels on which to enjoy Cynthia Riggs's latest mystery....There is the twisting and turning plot of a good murder mystery. And there is prose, beautifully written, by a wonderful writer.” —The Martha's Vineyard Times on Indian Pipes

“This smoothly executed, fun read contrasts the beauty of Martha's Vineyard with the drama of the unsolved murders. Readers will adore Victoria, a smart and witty sleuth who's as crafty as she is charismatic.” —RT Book Reviews on Paperwhite Narcissus

“Victoria Trumbull is the senior citizen we all pray to become.” —Kingston Observer on Paperwhite Narcissus

“A standout among other works of detective fiction...Ms Rigg's lady detective is about as likable and fascinating an Island character as you're likely to encounter anywhere.” —The Martha's Vineyard Times

CYNTHIA RIGGS is the author of the Martha’s Vineyard mystery series and the guidebook Victoria Trumbull’s Martha’s Vineyard. She started writing the series while earning her MFA at Vermont College at age 68. Prior to becoming an author, she qualified for the 1948 Olympic fencing team, was the seventh woman to set foot on the South Pole, and crossed the Atlantic twice in a thirty-two-foot sailboat. Riggs gives weekly lectures onboard tourist ships during the summer and shepherds two writing groups. She lives in West Tisbury, Massachusetts where she runs a bed and breakfast out of the homestead that has been in her family for eight generations.
Loading...
or
Not Currently Available for Direct Purchase