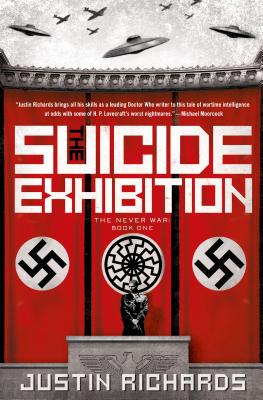 The threat is not new. The aliens have been here before.

The German war machine has woken an ancient threat - the alien Vril and their Ubermensch have returned. With this new power, ultimate Victory in the war for Europe is now within the Nazis' grasp.Obsessed with the Occult, Hitler and other senior Nazis believed they were destined to inherit the Earth. To this end, they are determined to recover 'their' ancient artifacts -- the Ark of the Covenant, the Holy Grail, the Spear of Destiny. When Dunkirk veteran and Foreign Office trouble-shooter Major Guy Pentecross stumbles across a seemingly unbelievable conspiracy, he, together with pilot and American spy Sarah Diamond and SOE operative Leo Davenport, enter the shadow world of Section Z. All three have major roles to play as they uncover the Nazis' insidious plot to use the Vril's technology to win the war... at any cost.

Justin Richards has an extremely credible grasp of WWII history and has transformed it into a groundbreaking alternate reality thriller in The Suicide Exhibition.


Praise For The Suicide Exhibition: A Novel (The Never War #1)…

“Justin Richards brings all his skills as a leading Doctor Who writer to this tale of wartime intelligence at odds with some of H.P. Lovecraft's worst nightmares.” —Michael Moorcock

“Justin Richards has reworked an old myth to nightmarish effect. You get the feeling that if the Nazis could have done this, they would. The Suicide Exhibition has a ghastly plausibility.” —Stephen Baxter, author of Doctor Who: The Wheel of Ice

“The audacious use of historical characters in this book owes much to the vast influence of the ever-changing Time Lord... And, with Richard's evident knowledge of historical settings, it works well.” —Fantasy Book Review (UK)

“If you're a fan of gritty action novels and enjoy science fiction then this mash-up could well be the book for you!” —The Eloquent Page

“Justin Richards has perfectly captured a sepia-toned world of wax-sealed envelopes, typewritten orders and Nazi supernatural conspiracies...The narrative quickly moves from a pastiche of a Jones-style archeological dig to a complex spy thriller.” —Starburst Magazine, 9 out of 10 stars

Justin Richards is a British writer. He has written many spin off novels based on the BBC science fiction television series Doctor Who, and he is Creative Director for the BBC Books range. He has written for television, contributing to Five's soap opera Family Affairs. He is also the author of a series of crime novels for children about the Invisible Detective, and novels for older children. His Doctor Who novel The Burning was placed sixth in the Top 10 of SFX magazine's "Best SF/Fantasy novelization or TV tie-in novel" category of 2000.
Loading...
or
Not Currently Available for Direct Purchase