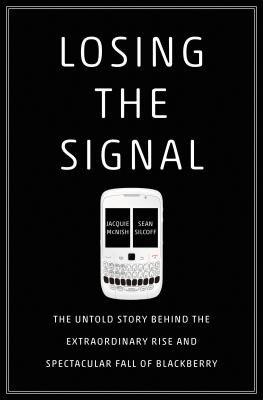 A Best Business Book of the Year, Forbes Magazine

A Times of London Book of the Week

In 2009, BlackBerry controlled half of the smartphone market. Today that number is less than one percent. What went so wrong?

With unprecedented access to key players, senior executives, directors and competitors, Losing the Signal unveils the remarkable rise of a company that started above a bagel store in Ontario. At the heart of the story is an unlikely partnership between a visionary engineer, Mike Lazaridis, and an abrasive Harvard Business school grad, Jim Balsillie. Together, they engineered a pioneering pocket email device that became the tool of choice for presidents and CEOs. The partnership enjoyed only a brief moment on top of the world, however. At the very moment BlackBerry was ranked the world's fastest growing company internal feuds and chaotic growth crippled the company as it faced its gravest test: Apple and Google's entry in to mobile phones.

Expertly told by acclaimed journalists, Jacquie McNish and Sean Silcoff, this is an entertaining, whirlwind narrative that goes behind the scenes to reveal one of the most compelling business stories of the new century.

JACQUIE MCNISH is one of the most experienced business journalists in Canada. She has led coverage of many of the most significant business stories of the past 25 years for Canada’s top business publications. McNish is a senior writer with the Globe and Mail and before that the Wall Street Journal. She has won six National Newspaper Awards for her ground- breaking investigations into some of the biggest business stories of the past three decades. She is a regular host on Canada’s business news station BNN and an adjunct professor at Osgoode Hall Law School. She lives in Toronto with her husband and two sons.

SEAN SILCOFF is one of the most experienced business journalists in Canada. He has led coverage of many of the most significant business stories of the past 25 years for Canada’s top business publications. Silcoff is an award-winning business writer with the Globe and Mail. During his 17-year business reporting career he has covered just about every area of business, from agriculture to the credit crisis, toys to airplane manufacturing. In his two years with the Globe and Mail he has won a National Newspaper Award and led the paper’s coverage of BlackBerry. He is also a contributor to Report on Business Insight, the business section’s signature commentary section. His 2005 series for The National Post on Brazilian plane-maker Embraer won an Aerospace Journalist of the Year Award and was a two-time winner of the Edward Goff Memorial Prize for Young Canadian Journalists during his career as a crime reporter. He lives in the Gatineau Hills near Ottawa with his wife and three children.

Praise For Losing the Signal: The Untold Story Behind the Extraordinary Rise and Spectacular Fall of BlackBerry…

“In the tech industry, they say that you learn more from a failure than from a hit. Well, if that's true, Losing the Signal will give you a post-doctoral education. Reading the inside story of the BlackBerry's helpless flameout is like watching any other train wreck: You're horrified, but you can't look away.” —David Pogue, Author of POGUE'S BASICS and founder of Yahootech.com

“In LOSING THE SIGNAL, Jacquie McNish and Sean Silcoff tell the harrowing and riveting story of how we lost the connection to the Blackberry, a communication device so innovative and addictive that it was known, among aficionados, as a Crackberry. It's a tale of rivalries, jealousies and missed opportunities. You won't be able to put it down.” —William Cohan, author of HOUSE OF CARDS: A Tale of Hubris and Wretched Excess on Wall Street and MONEY AND POWER: How Goldman Sachs Came to Rule the World

For every winner...disruption brings a loser, and few lost bigger than the once-ubiquitous BlackBerry. The authors show how easily even the strongest brands can fail by underestimating their competitors. “Losing the Signal" is a good old-fashioned insider's business narrative, the kind we don't see enough of these days, and it should scare the pants off most CEOs." - The Wall Street Journal

“Losing the Signal tells of the marriage and divorce of Mike Lazaridis and Jim Balsillie, how two opposites built RIM into a world-beater and how they lost it. This is first-class reporting that reads like a juicy novel, with one amazing story after another. A terrific book.” —Howard Green, author of Banking on America

“Losing the Signal is a riveting story of a company that toppled global giants before succumbing to the ruthlessly competitive forces of Silicon Valley… With unprecedented access to key players, senior executives, directors and competitors, Losing the Signal unveils the remarkable rise of a company that started above a bagel store in Ontario… Expertly told by acclaimed journalists, McNish and Silcoff, this is an entertaining, whirlwind narrative that goes behind the scenes to reveal one of the most compelling business stories of the new century.”
—Financial Times

"The simple story is that BlackBerry was rendered irrelevant by the iPhone. But the story that the authors, Jacquie McNish and Sean Silcoff, tell in Losing the Signal — our choice for the best book of 2015 on business narratives — is more complicated." - Strategy and Business

“[McNish and Silcoff have] produced a tragedy worthy of Shakespeare's attention... So even as you read, with a kind of shiver of schadenfreude, about BlackBerry's vicissitudes, there's plenty of food for thought here about what this means on a much broader stage.” —Yahoo! Finance

“In Losing the Signal, McNish and Silcoff authoritatively chronicle the missteps that abetted BlackBerry's fall... It's one helluva story.” —Toronto Star

“LOSING THE SIGNAL [is] a saga of digital entrepreneurs who saw the future and made it happen... This fascinating story will hold your attention even though you know what's coming.” —The Washington Post