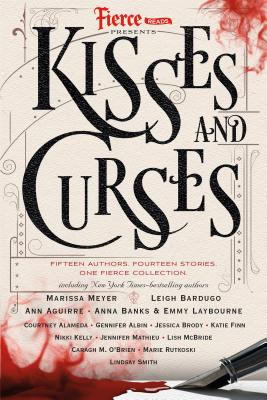 Every page more fierce than the last! Enjoy a good monster love story? Or a dark, Russian-style folktale? How about a flashback to the secrets of a cyborg's past, a post-apocalyptic romance, or a conversation between a boy and Death's dead assistant, while both sit in a diner and eat waffles?

By turns uplifting and sad, light-hearted and powerful, startling and laugh-out-loud, these bite-sized gems have one thing in common: You won't be able to put them down!

ANN AGUIRRE is a New York Times & USA Today bestselling author and RITA winner with a degree in English literature. She lives in sunny Mexico with her husband, children, and various pets. She likes books, emo music, and action movies. She writes all kinds of genre fiction for adults and teens, including the Razorland series and Like Never and Always.

Gennifer Albin is the author of Crewel World trilogy Crewel, Altered, and Unraveled. She holds a master’s degree in English literature from the University of Missouri and founded the tremendously popular blog The Connected Mom. She lives in Poulsbo, Washington.

Anna Banks grew up in a small town called Niceville (yes, really). She now lives in Crestview, Florida, with her husband and their daughter. She is the author of The Syrena Legacy series: Of Poseidon, Of Triton, and Of Neptune.

Leigh Bardugo is a #1 New York Times-bestselling author and the creator of the Grishaverse (now a Netflix original series) which spans the Shadow and Bone Trilogy, the Six of Crows Duology, The Language of Thorns, and King of Scars—with more to come. Her short stories can be found in multiple anthologies, including the Best American Science Fiction & Fantasy. Her other works include Wonder Woman: Warbringer and Ninth House (Goodreads Choice Winner for Best Fantasy 2019) which is being developed for television by Amazon Studios. She lives in Los Angeles.

Jessica Brody knew from a young age that she wanted to be a writer. She started "self-publishing" her own books when she was seven years old, binding the pages together with cardboard, wallpaper samples and electrical tape. Brody graduated from Smith College in 2001 with a double major in Economics and French and a minor in Japanese. She went to work for MGM Studios as a Manager of Acquisitions and Business Development, and then, in 2005, she quit her job to follow her dream of becoming a published author. Brody is the author of two novels for adults--The Fidelity Files and Love Under Cover--and the young adult novels The Karma Club and My Life Undecided. Jessica's books are published in over ten foreign countries including the U.K., France, Germany, Czech Republic, Russia, Brazil, China, Portugal, and Taiwan. She now works full time as a writer and producer, and currently splits her time between Los Angeles and Colorado.

Katie Finn is the author of the Top 8 trilogy. She's never plotted revenge on anyone (who didn’t deserve it) but has been known to assume another identity. To this day, she and Morgan Matson have never been seen in the same room. She lives in Los Angeles, in a house she wishes was a lot closer to the beach.

Nikki Kelly is the author of Lailah, Book One of the Styclar Saga. Lailah was first launched in serial form on Wattpad, an online readers' and writers' community. Within six months, the novel had over one million reads. Nikki lives in London with her husband and their daughter.

Jennifer Mathieu is the author of Devoted, Afterward, The Liars of Mariposa Island, and The Truth About Alice, which won the Teen Choice Debut Author Award. Her 2017 novel, Moxie, was developed into a film by Amy Poehler for Netflix. Jennifer teaches high school English in Texas, where she lives in the Houston area with her husband and son.

Lish McBride grew up in the Pacific Northwest. It rains a lot there, but she likes it anyway. She spent three years away while she got her MFA in fiction from the University of New Orleans, where she managed to survive the hurricane. She enjoys reading, having geek-laden conversations about movies, comics, and zombies with her friends, and of course trying to wear pajamas as much as humanly possible. She lives happily in Mountlake, WA, with her family, two cats, and one very put-upon Chihuahua. Her debut novel, Hold Me Closer, Necromancer was named an American Library Association Best Book for Young Adults and was a finalist for the YALSA William C. Morris Award.

Caragh M. O’Brien is the author of the BIRTHMARKED trilogy and THE VAULT OF DREAMERS trilogy. Born in St. Paul, Minnesota, Ms. O’Brien was educated at Williams College and earned her MA in the Writing Seminars from Johns Hopkins University. Her young adult science fiction has been honored by the YALSA Best Fiction for Young Adults, the Amelia Bloomer Award, the Junior Library Guild, and numerous state reading lists. A former high school English teacher, she now writes young adult novels full time from her home in rural Connecticut.

Born in Illinois, Marie Rutkoski is a graduate of the University of Iowa and Harvard University. She is a professor of English literature at Brooklyn College and a New York Times bestselling author of books for children and young adults. She lives in Brooklyn with her family.