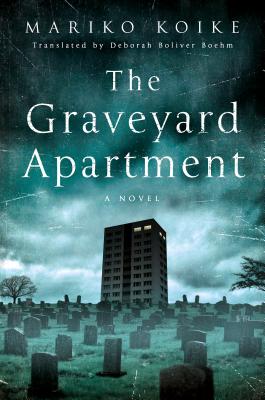 One of the most popular writers working in Japan today, Mariko Koike is a recognized master of detective fiction and horror writing. Known in particular for her hybrid works that blend these styles with elements of romance, The Graveyard Apartment is arguably Koike’s masterpiece. Originally published in Japan in 1986, Koike’s novel is the suspenseful tale of a young family that believes it has found the perfect home to grow into, only to realize that the apartment’s idyllic setting harbors the specter of evil and that longer they stay, the more trapped they become.

This tale of a young married couple who harbor a dark secret is packed with dread and terror, as they and their daughter move into a brand new apartment building built next to a graveyard. As strange and terrifying occurrences begin to pile up, people in the building start to move out one by one, until the young family is left alone with someone... or something... lurking in the basement. The psychological horror builds moment after moment, scene after scene, culminating with a conclusion that will make you think twice before ever going into a basement again.


Praise For The Graveyard Apartment: A Novel…

“Claustrophobic and chilling, Mariko Koike’s novel will slowly wrap its icy finger around your neck, while the last thirty pages will have you holding your breath. Highly recommended!” —Ronald Malfi, author of Little Girls

“This incredibly creepy story seeps into your bones like that basement chill, searing imagery into your brain that’s so startling, your nightmares – and elevator rides – will never be the same.” —Maria Alexander, Bram Stoker Award winner and author of Mr. Wicker

MARIKO KOIKE was born in Tokyo and is the recipient of a number of literary awards including the Naoki Prize, the Shibata Renzaburo Award, and most recently the Yoshikawa Eiji Prize for Literature.
Loading...
or support indie stores by buying on