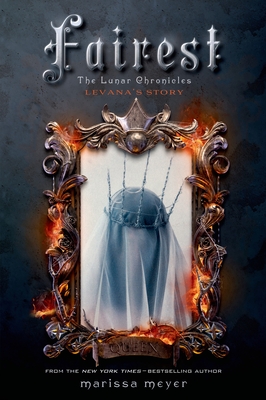 Pure evil has a name, hides behind a mask of deceit, and uses her "glamour" to gain power. But who is Queen Levana? Long before she crossed paths with Cinder, Scarlet, and Cress in The Lunar Chronicles, Levana lived a very different story—a story that has never been told . . . until now.
New York Times –bestselling author Marissa Meyer reveals the story behind her fascinating villain in Fairest, an unforgettable tale about love and war, deceit and death. This extraordinary book includes a special full-color image of Levana's castle and an excerpt from Winter, the exciting conclusion to The Lunar Chronicles.

“She loves fiercely and kills with little remorse; her iron grip over the Lunar people is equal parts impressive and terrifying. Queen Levana from "The Lunar Chronicles'" is more than a beautiful villain. In this prequel, Meyer explains how she went from lonely, shy second daughter to the most feared and relentless woman in the universe. . . . Thorough world-building and fascinating character development will thrill fans and entice new readers.” —School Library Journal