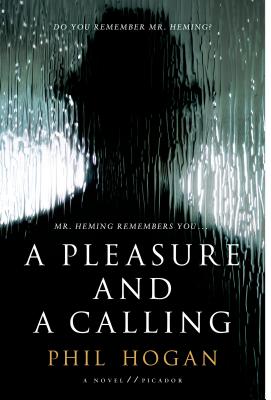 A Pleasure and a Calling

A DELICIOUSLY UNSETTLING TALE OF PSYCHOLOGICAL SUSPENSE THAT DELVES INTO THE MIND OF A MAN WITH A CHILLING DOUBLE LIFE.

Mr. Heming loves the leafy English village where he lives. As a local real estate agent, he knows every square inch of the town and sees himself as its protector, diligent in enforcing its quaint charm. Most people don't pay much attention to Mr. Heming; he is someone who fades easily into the background. But Mr. Heming pays attention to them. You see, he has the keys to their homes. In fact, he has the keys to every home he's ever sold in town. Over the years, he has kept them all so that he can observe his neighbors, not just on the street, but behind locked doors.
Mr. Heming considers himself a connoisseur of the private lives of others. He is witness to the minutiae of their daily lives, the objects they care about, the secrets they keep. As details emerge about a troubled childhood, Mr. Heming's disturbing hobby begins to form a clear pattern, and the reasons behind it come into focus. But when the quiet routine of the village is disrupted by strange occurrences, including a dead body found in the backyard of a client's home, Mr. Heming realizes it may only be a matter of time before his secrets are found out.
A brilliant portrait of one man's obsession, A Pleasure and a Calling by Phil Hogan is a darkly funny and utterly transfixing tale that will hold you under its spell.


Praise For A Pleasure and a Calling: A Novel…

“I loved A Pleasure and a Calling--gripping, sinister, original and brilliant!” —Sophie Hannah, bestselling author of The Monogram Murders and The Orphan Choir

“The word 'creepy' (attached to descriptive adverbs like 'insanely' and 'diabolically' or even 'deliciously') immediately comes to mind after a quick dip into A Pleasure and a Calling.” —Marilyn Stasio, New York Times Book Review

“A Pleasure and a Calling starts out slowly, meticulously building the first-person portrait of a sociopath. But, 70 pages in, the novel takes a sharp turn into Patricia Highsmith country, and the deliberately bland, purposely forgettable Heming stands revealed as Tom Ripley with a real estate license....This is [Phil Hogan's] first book to be published in the United States. Here's hoping for more to come.” —Dallas Morning News

“Hogan avoids clichés as he delivers one surprise after another. Heming at first seems harmless, but Hogan shows bit by bit how Heming has been scheming and diabolical, making this complex character both a villain and a hero. A Pleasure and a Calling brims with wry wit and taut tension, and will make readers think about changing the locks on their doors, just to be cautious.” —Associated Press

“How mesmerizing is this book? I started it at lunch one day and finished it after dinner the same night….Reminiscent of Patricia Highsmith's Ripley books.” —The Charlotte Observer

“Beware, readers. Heming descends from a long line of dangerously seductive, alienated narcissists that includes Patricia Highsmith's Tom Ripley and Charles Anthony-Strangers on a Train-Bruno....Hogan is an especially agile storyteller, and he has assembled an admirably intricate back-story that explains (if not excuses) how Heming has come to be who he is. It's an exhilarating performance. Plan on having your locks changed soon after you finish reading the book.” —Richmond Times-Dispatch

“Engagingly written and compulsively readable...Readers will find themselves wondering just how secure their own homes are, and, at the same time, uncomfortably beguiled by the often charming Mr. Heming, whose heart is in the right place--except when it is decidedly not.” —The Columbus Dispatch

“Need some morbidly funny and unsettling psychological suspense? Look no further than Phil Hogan's A Pleasure and a Calling.” —The Seattle Times

“Along with the stylistic echoes of Highsmith, Hogan also moves into the creepy-campy territory that Roman Polanski staked out, especially in The Tenant and Rosemary's Baby....Hogan deftly creates situational suspense throughout the novel.” —Los Angeles Review of Books

“A gripping psychological thriller that pegs out the creep-o-meter with its chilling, original plot...Hogan's Mr. Heming is a monumentally diabolical character--the fact that he narrates the story further ups both the stakes and the tension. Readers won't soon forget this first-rate, white-knuckle suspense novel.” —Publishers Weekly (starred review)

“This is murder most droll...Phil Hogan has written a wickedly funny book.” —The Washington Times

“Channeling the socially detached and unnerving personality of Nabokov's Humbert Humbert, Phil Hogan creates a character that will inspire intrigue as well as ire….This perfectly paced psychological suspense story is a roller-coaster ride through paranoia and manipulation.” —BookPage

“A creepy but compelling story.” —Kirkus Reviews (Eight Top-Shelf Crime Yarns to Help You Ring in 2015)

“Hugely engrossing . . . Hogan captures perfectly [Heming's] mix of rationality and madness--the sense of logical means applied to deranged ends. The result is that we sympathize with Heming, embrace his plight--which only heightens our discomfort.” —The Guardian (UK)

“William Heming is cut from the same cloth as Barbara Covett in Zoë Heller's Notes On A Scandal, another unreliable narrator with whom we really should not be siding, but who proves so engaging that we can't help but go along for the ride . . . [A] gripping, thrilling novel.” —The Independent on Sunday (UK)

“The first-person portrayal of a truly cold-blooded protagonist is a hard thing to pull off, especially one whose outward appearance is so benign, but Phil Hogan has created an antihero horrifically ruthless and disquieting.” —The Guardian (UK)

“There is a delicious feeling of complicity in his misdemeanors. Heming gets inside your head as easily as he gets into his neighbors' houses. Indeed you cannot help asking as you finish this superbly plotted and genuinely creepy novel: wouldn't we all pry into our neighbors' lives like this if we could get away with it?” —Sunday Express (UK)

“You'll definitely want to change your locks after reading this original and darkly funny novel… [It] will send shivers down your spine.” —The Stylist (UK)