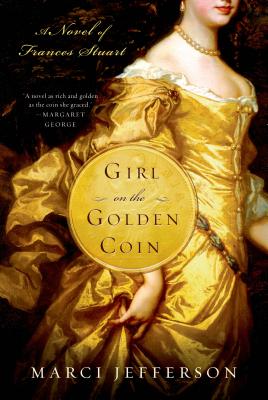 Girl on the Golden Coin

A Novel of Frances Stuart

Impoverished and exiled to the French countryside after the overthrow of the English Crown, Frances Stuart survives merely by her blood-relation to the Stuart Royals. But in 1660, the Restoration of the Stuart Monarchy in England returns her family to favor. Frances discards threadbare gowns and moves to gilded Fontainebleau Palace, where she soon catches the Sun King's eye. But Frances is no ordinary court beauty-she has Stuart secrets to keep and her family to protect. King Louis XIV turns vengeful when she rejects his offer to become his Official Mistress. He banishes her to England with orders to seduce King Charles II and secure an alliance.

Armed in pearls and silks, Frances maneuvers the political turbulence of Whitehall Palace, but still can't afford to stir a scandal. Her tactic to inspire King Charles to greatness captivates him. He believes her love can make him a better man, and even chooses Frances to pose as Britannia for England's coins. Frances survives the Great Fire, the Great Plague, and the debauchery of the Restoration Court, yet loses her heart to the very king she must control. The discovery of a dangerous plot will force her to choose between love for herself and war for her beloved country.
Debut author Marci Jefferson's Girl on the Golden Coin brings to life a captivating woman whose beauty, compassion, and intellect impacted a king and a nation.


Praise For Girl on the Golden Coin: A Novel of Frances Stuart…

“Jefferson's intoxicating first novel superbly draws readers into the mischief and maneuverings, loyalties and treacheries, and lust and hostility of powerful 17th century kings and scheming court sycophants. Frances Stuart, a young distant cousin of King Charles II, and other historical figures reveal the essence of Restoration England in this captivating story....Jefferson aptly recounts the passionate affair and resulting potential 'political calamity,' the queen's infertility, the mistresses and illegitimate children, and the turmoil of London's devastating plague, the great fire and the Dutch war....this is an exciting, solid debut.” —Publishers Weekly (starred review)

“Jefferson fictionalizes the life of a little-known--yet exceedingly familiar--historical figure in her authentically detailed debut...Faced with some difficult choices regarding love, loyalty, family, and duty, Frances staunchly follows her own path into the annals of history as she poses as a model for the visage of Britannia, destined to grace coins, medals, and statues for centuries. This small leap from the Tudors is a must-read for Alison Weir-Philippa Gregory fans.” —Booklist

“Scheming, unscrupulous Lady Castlemaine, Charles' wilful sister, the easy-going king himself and even Frances' rather sweet husband who makes just brief appearances are well-drawn characters who add to the novel's charm. Jefferson is an accomplished writer, and Girl on the Golden Coin is an excellent debut that sets a high standard for any future works.” —Roanoke Times

“Written with spirit and insight, the novel reveals both the glamour and the dirt of court life while peering into the soul of a woman who is one of the unsung heroines of English history.” —Historical Novels Review

“Marci Jefferson's debut novel Girl on the Golden Coin paints a rich and vivid portrayal …A juicy vacation read when you want to become embroiled in an entirely different world…Once the first page turns, you won't want to come up for air.” —Daily Press

“A novel as rich and golden as the coin she graced. Frances Stuart's face was truly her fortune and left its mark on history, a rare achievement.” —Margaret George, New York Times bestselling author of Elizabeth I: The Novel

“A delicious story of court intrigues, affairs and vibrant personalities, Jefferson's novel is sure to please fans of historical fiction of all kinds.” —Madeline Hunter, New York Times bestselling author of The Counterfeit Mistress

“In her wonderfully evocative debut, Marci Jefferson recreates the fascinating story of Frances Stuart, whose influence over England's Charles II became the talk of a nation. As vibrant and delightful as the woman it's based on, Girl on the Golden Coin is a jewel of a novel!” —Michelle Moran, national bestselling author of The Second Empress

“Beauty is not always a blessing, as young Frances Stuart finds out when her lovely face pits her between the desires and politics of rival kings Louis XIV and Charles II. Frances makes an appealing heroine, by turns wary and passionate, sophisticated and innocent, as she matures from destitute young pawn to the majestic duchess whose figure would grace Britain's coins for centuries. Her struggles to support her loved ones, uncover her family secrets, and somehow find a life of her own amid the snake-pit courts of the Sun King and the Merry Monarch make for lively, entertaining reading in this lush Restoration novel by debut author Marci Jefferson.” —Kate Quinn, national bestselling author of Mistress of Rome

“Girl on the Golden Coin is a sexy, exciting tale featuring vivid characters, rich historical detail, scintillating court intrigue, and a complexly rendered heroine in Frances Stuart, Maid of Honor to the Queen of England, who will capture the reader's heart--as will the man she loves, that rascal King Charles II.” —Sherry Jones, internationally bestselling author of Four Sisters, All Queens

“Fans of historical fiction featuring interesting but previously overlooked women have reason to celebrate the release of Girl on the Golden Coin. With a deft hand, Marci Jefferson brings to vivid life Frances Stuart, Duchess of Richmond--a woman with the charms of Josephine Bonaparte and style of Marie Antoinette, who captured the hearts of Kings on both sides of the channel. Frances is a thoroughly likeable heroine who puts duty to her King, her country, and her family before the desires of her own heart. But Frances, as written by Jefferson, is no paper-saint. She is a flesh and blood woman who modern readers will recognize and identify with. The balance of the novel's characters are equally well drawn--full of nuance and complexity. Do not miss this marvelous debut!” —Sophie Perinot, author of The Sister Queens

“Marci Jefferson spins a spirited yarn in Girl on the Golden Coin, a Restoration novel packed with beribboned courtiers and ebullient dialogue and the utterly likable and cunning Frances Stuart, distant cousin of King Charles II. A realistic view of court intrigue, this story of merry-making and mischief and the ultimate test of honor will delight readers and keep them turning pages long into the night.” —Heather Webb, author of Becoming Josephine

“Girl on the Golden Coin is a fantastic novel. I couldn't put it down. The plot is fast-paced and compelling, with intriguing characters, lush settings and captivating narrative voice. Jefferson's debut paints an intriguing portrait of Frances Stuart, a novel worthy of the determined, golden spirit of the woman whose face became the model for Brittania herself.” —Susan Spann, author of Claws of the Cat

MARCI JEFFERSON is the author of Girl on the Golden Coin. She graduated from Virginia Commonwealth University's Medical College as a Registered Nurse. She is a member of the Historical Novel Society. Jefferson lives in Indiana with her husband and children.
Loading...
or support indie stores by buying on