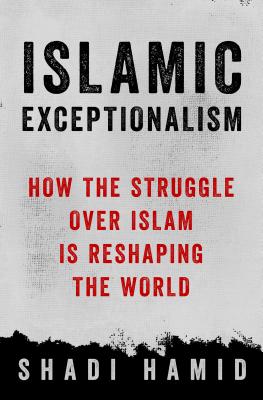 How the Struggle Over Islam Is Reshaping the World

Shortlisted for the 2017 Lionel Gelber Prize

In Islamic Exceptionalism, Brookings Institution scholar and acclaimed author Shadi Hamid offers a novel and provocative argument on how Islam is, in fact, "exceptional" in how it relates to politics, with profound implications for how we understand the future of the Middle East. Divides among citizens aren't just about power but are products of fundamental disagreements over the very nature and purpose of the modern nation state—and the vexing problem of religion’s role in public life. Hamid argues for a new understanding of how Islam and Islamism shape politics by examining different models of reckoning with the problem of religion and state, including the terrifying—and alarmingly successful—example of ISIS.

With unprecedented access to Islamist activists and leaders across the region, Hamid offers a panoramic and ambitious interpretation of the region's descent into violence. Islamic Exceptionalism is a vital contribution to our understanding of Islam's past and present, and its outsized role in modern politics. We don't have to like it, but we have to understand it—because Islam, as a religion and as an idea, will continue to be a force that shapes not just the region, but the West as well in the decades to come.


Praise For Islamic Exceptionalism: How the Struggle Over Islam Is Reshaping the World…

A New Statesman Book of the Year


"Few issues capture the public imagination quite so urgently as that of Islam’s troubled relationship with the West, democracy, modernity and, indeed, itself... This is where Shadi Hamid’s Islamic Exceptionalism comes into its own." –Shiraz Maher, The New Statesman

“Well, it turns out, there is something going on with Islam, and Shadi Hamid, quite helpfully, has figured it out… [An] illuminating book.” –Carlos Lozada, The Washington Post

"A page-turner… For me, the book also provided the rarest of enjoyments; it changed the way I looked at the world, even if just a bit." –Murtaza Hussain, journalist at The Intercept

"[Islamic Exceptionalism] limns the Islamist mind in unnerving detail... Hamid is unafraid to talk about heaven, theodicy and divine justice.” –The National Interest

“Perhaps [Hamid’s] most provocative claim is this: History will not necessarily favor the secular, liberal democracies of the West.” –Emma Green, The Atlantic

“Shadi Hamid provides an invaluable corrective to Western interpretations of Islam, Islamism, and the future of democracy in the Muslim world. Whatever debate remains to be had cannot take place without reference to this insightful and sympathetic document.”–Lawrence Wright, author of The Looming Tower and Thirteen Days in September

“A riveting account of the Arab Spring and all that followed, by one of the world’s leading scholars on political Islam. Shadi Hamid explains convincingly that Islam and the political movements it spawns are truly exceptional and likely to frustrate the ‘liberal determinists’ who believe that history inevitably gravitates to a secular future. A hugely important book.” –General David Petraeus (Ret.), former director of the CIA and commander of coalition forces in Iraq and Afghanistan

“Islamic Exceptionalism is an honest, deeply researched, and at times anguished effort to make sense of the Middle East after the failure of the Arab Spring and the rise of ISIS. Particularly rich and subtle on the crisis facing the Muslim Brotherhood, the book offers both a snapshot of a painful moment and a long-view inquiry into the meeting between Islam and democracy. Sobering, urgent reading for anyone who cares about the region, past and future.” –Noah Feldman, Felix Frankfurter Professor of Law, Harvard Law School and author of Cool War, Scorpions, and The Fall and Rise of the Islamic State

"A smart and highly readable book by one of the leading experts on the topic. Hamid examines the defining problem in the modern Middle East: how to mix religion and politics. His heartfelt fear is that in the age of ISIS a solution won’t come quickly because the features of a modern democratic state are often at odds with the path to God.”–David Gregory, former host of Meet the Press and author of How’s Your Faith

“Hamid offers readers a vital road map to navigate the chaos and confusion that is the post–Arab-Spring Middle East.” –Reza Aslan, New York Times bestselling author of Zealot and No God but God

“Beyond the zero-sum proposals of Islam or liberalism, Shadi Hamid boldly wrestles with how these two can negotiate the future of Muslim polities. Along the way, he educates us, challenging entrenched stereotypes and blind presumptions, especially the notion that the Muslim world must, can, or should go the way of the West. Islam is a constant not a variable. Islamic Exceptionalism suggests that this may be the beginning of wisdom for anyone wishing to understand, let alone shape, the political future of majority Muslim states.”–Sherman A. Jackson, King Faisal Chair in Islamic Thought and Culture, University of Southern California

“Probably the most thoughtful attempt that I know to come to grips, to try to make sense of the rubble of the Arab Spring, to see what can be done after these colossal disappointments.” – Leon Wieseltier, Isaiah Berlin Senior Fellow in Culture and Policy, The Brookings Institution

"Hamid’s work offers a tempered, well-researched analysis of Islamism in its current state and offers tentative hopes for those seeking a new way through the intricacies of Islamic politics in the Middle East." –Publishers Weekly

"For those who feel that everything will be solved by an 'Islamic reformation,' Hamid has cautionary words." --Prospect

Shadi Hamid is director of research at the Brookings Doha Center and a fellow at the Saban Center for Middle East Policy at the Brookings Institution. He is a correspondent for The Atlantic, vice-chair of the Project on Middle East Democracy,and a member of the World Bank's MENA Advisory Panel. Prior to joining Brookings, he was director of research at POMED and a Hewlett Fellow at Stanford University's Center on Democracy, Development, and the Rule of Law. He lives in Washington, D.C.
Loading...
or
Not Currently Available for Direct Purchase