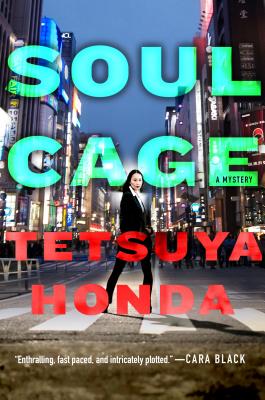 A severed hand, a missing body, and a victim who was living under a false identity all add up to the most complex and challenging case yet for Homicide Detective Reiko Himekawa - in Tetsuya Honda's Soul Cage.

A worker reports his boss missing, and a large amount of blood is found in the rented garage he used. At the same time, a severed left hand is found in a minivan abandoned in the outskirts of Tokyo, which is quickly identified as belonging to this missing man, Kenichi Takaoka. Lt. Reiko Himekawa of the Homicide Division of the Tokyo Metropolitan Police Department is assigned to the investigation, along with her squad and several other units. From the amount of blood spilled in the van and at the crime scene, it’s clear to the team that the missing contractor Keninichi Takaoka is dead and presumably murdered. But searches of the area around the abandoned van and the river itself fail to turn up the rest of the body.

The mystery surrounding the murder takes a sharp turn when a childhood friend of the presumed victim is shown a recent photo and definitively declares that the missing man is not Takaoka. With every line of investigation leading to a confusing dead end, Himekawa and her team uncover a trail leading to a long-running yakuza scheme of forced suicide for profit, a complex history of victims, and a case of past transgressions coming back to destroy the present. As time runs out, Himekawa must unravel the mystery surrounding the severed hand if she’s to protect and rescue the next victim.

TETSUYA HONDA is one of Japan's best-selling authors with the ongoing crime series featuring Reiko Himekawa, a Homicide Detective with the Tokyo Metropolitan Police, appearing in such novels as The Silent Dead and Soul Cage. The series has sold roughly 4 million copies in Japan, and is the basis for two TV mini-series, a TV special, and a major theatrical motion picture. Honda lives in Tokyo.