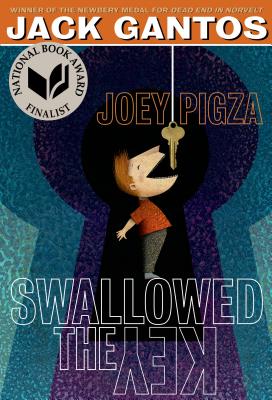 "They say I'm wired bad, or wired sad, but there's no doubt about it—I'm wired."

Joey Pigza's got heart, he's got a mom who loves him, and he's got "dud meds," which is what he calls the Ritalin pills that are supposed to even out his wild mood swings. Sometimes Joey makes bad choices. He learns the hard way that he shouldn't stick his finger in the pencil sharpener, or swallow his house key, or run with scissors. Joey ends up bouncing around a lot - and eventually he bounces himself all the way downtown, into the district special-ed program, which could be the end of the line. As Joey knows, if he keeps making bad choices, he could just fall between the cracks for good. But he is determined not to let that happen.

In this antic yet poignant new novel, Jack Gantos has perfect pitch in capturing the humor, the off-the-wall intensity, and the serious challenges that life presents to a kid dealing with hyper-activity and related disorders. This title has Common Core connections.

“* In this rollercoaster of a ride, ingenuously and breathlessly narrated by Joey himself, readers are treated to an up-close introduction to life with attention deficit disorder--or being wired, as Joey puts it. . . . Readers of this compelling tragicomedy will know almost from the start that Joey's not just a good kid--he's a great kid.” —The Horn Book, starred review