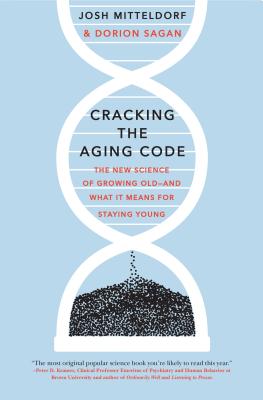 A revolutionary examination of why we age, what it means for our health, and how we just might be able to fight it.

In Cracking the Aging Code, theoretical biologist Josh Mitteldorf and award-winning writer and ecological philosopher Dorion Sagan reveal that evolution and aging are even more complex and breathtaking than we originally thought. Using meticulous multidisciplinary science, as well as reviewing the history of our understanding about evolution, this book makes the case that aging is not something that “just happens,” nor is it the result of wear and tear or a genetic inevitability. Rather, aging has a fascinating evolutionary purpose: to stabilize populations and ecosystems, which are ever-threatened by cyclic swings that can lead to extinction.

When a population grows too fast it can put itself at risk of a wholesale wipeout. Aging has evolved to help us adjust our growth in a sustainable fashion as well as prevent an ecological crisis from starvation, predation, pollution, or infection.

This dynamic new understanding of aging is provocative, entertaining, and pioneering, and will challenge the way we understand aging, death, and just what makes us human.

Theoretical-biologist Josh Mitteldorf has a PhD from UPenn. He runs the website AgingAdvice.org, and writes a weekly column for ScienceBlog.com. Mitteldorf has had visiting research and teaching positions at various universities including MIT, Harvard, and Berkeley.

DORION SAGAN is a celebrated writer, ecological philosopher, and author or coauthor of several books, many of which have been translated into over a dozen languages, including Into the Cool, Up from Dragons, and Microcosmos. His work has appeared in Natural History, Smithsonian, Wired, and The New York Times, among other publications.

Praise For Cracking the Aging Code: The New Science of Growing Old - And What It Means for Staying Young…

"A thoughtful examination of the role of aging and death in supporting life." —Kirkus Reviews

“Mitteldorf and Sagan take an extensive stroll through evolutionary theory and aging research in support of an off-center view… The authors may be on to something.” —Science News

"Science proves it: You can turn back the clock and feel ten (or even twenty!) years younger. In their new book...Josh Mitteldorf and Dorion Sagan outline the groundbreaking findings and offer an easy-to-follow plan to prevent and reverse the signs of aging." —Closer magazine

"Together Mitteldorf and Sagan slough off the old aging theories to make way for the new.... In many ways Cracking the Aging Code reminds me of On the Origin of Species—both work to overcome entrenched ideas...Mitteldorf is like a Darwin himself, full of questions about nature, plunging himself into thought against prevailing notions, making an intellectual voyage to the far ends of research to gather, with painstaking care, all the data needed to support the idea of group selection. For those readers who might not be aware of how scientific progress is made, I recommend this book because there is so much to be learned here from witnessing the struggle against orthodoxy, which is everything in science." —Digital Journal

“This is the science book of the year, the best I’ve read in quite a while… Mitteldorf supplies abundant evidence for his theory and it makes for fascinating reading… Cracking the Aging Code should be required reading for anyone interested in aging or indeed evolution and biology.” —Rogue Health and Fitness

"This truly revolutionary book presents a new view of aging: we don’t wear out; we are killed from within by genes timed to eliminate us for the good of the larger community. Are the authors right? They’re certainly persuasive, and the implications are staggering.” —Carl Safina, Stony Brook University Endowed Professor for Nature and Humanity and author of Beyond Words: What Animals Think and Feel

“In Cracking the Aging Code, an enlightening and entertaining elucidation of senescence, you’ll learn the sad truth: we are prey to an inner assassin. The programmed self-destruction we call aging is an inside job. But authors Mitteldorf and Sagan still manage to find hope and offer practical advice to help you live long and prosper.” —Julie Holland, MD, author of Moody Bitches: The Truth About The Drugs You're Taking, the Sleep You're Missing, the Sex You're Not Having, and What's Really Making You Crazy

“Cracking the Aging Code is the most original popular science book you’re likely to read this year. Josh Mitteldorf is a creative thinker and a master teacher. Whether you agree or disagree with the central premise—we are programmed to die—you’ll find that Cracking the Aging Code reshapes your understanding of profound issues concerning the genetic construction of life and death.” —Peter D. Kramer, Clinical Professor Emeritus of Psychiatry and Human Behavior at Brown University and author of Ordinarily Well and Listening to Prozac

“Brilliant, challenging, rejuvenating...with dazzling, sagacious prose and fascinating, cutting-edge science, Josh Mitteldorf and Dorion Sagan take an extended and profound look at the pernicious problems of death and aging from all angles. If you love life and want to live more of it, Cracking the Aging Code is brimming with ideas that are broken down with patience and humor so even the less scientifically-minded can grasp what the great anti-aging researchers are grappling with today.” —Susan Block, Ph.D., author of The Bonobo Way and director of the Dr. Susan Block Institute

“The authors have attacked one of the greatest paradoxes in the evolutionary sciences. If genes are so damned selfish, why do they code for the destruction of the bodies that carry them? This book includes many a fascinating, entrancing but real tale from nature. And it shows how every one of these pieces of evidence challenges us to answer the book's big question—why would genes code not just for survival but for an organism's annihilation?” —Howard Bloom, author of The Lucifer Principle: A Scientific Expedition into the Forces of History and The God Problem: How a Godless Cosmos Creates

“How do we grow into old age?’ Josh Mitteldorf knows as much about this subtle question as anyone writing today, and his account is full of surprises. He and his coauthor, Dorion Sagan, have created a winning combination of biological literacy and civilized conversation, a true gift to the reader.” —Angus Fletcher, Distinguished Professor Emeritus at The City University of New York Graduate School and author of The Topological Imagination: Spheres, Edges, and Islands