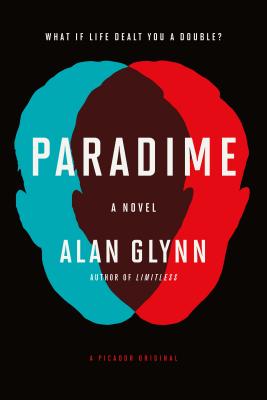 From Alan Glynn, the award-winning author of Limitless, comes a novel of a twenty-first-century identity crisis that will thrill you from page one.

Danny Lynch didn’t sign up for this, but right now, it’s all he’s got. Three weeks ago, he was working at a chow hall in Afghanistan and—more or less—doing fine. Sure, this meant living in a war zone, but he was never in the line of fire and, frankly, the money was hard to resist. Then Danny saw something he shouldn’t have, and now he’s back in New York City, haunted by what sent him home and lucky to be employed at all, even if that means dicing carrots for ten hours a day in a stuffy Midtown restaurant. The job’s one saving grace? A sight line from his prep station in the kitchen to a coveted corner table in the main room. For Danny, this is a window into the lives of some of Barcadero’s flashy clientele—and one evening, he sees a man who looks exactly like him.

Teddy Trager is the visionary founder of the billion-dollar investment firm Paradime Capital. He has everything Danny never knew he wanted—cashmere suits, a sleek sports car . . . privilege, power—and the closer Danny looks at Trager the more fixated he becomes.

Alan Glynn is a graduate of Trinity College. His first novel, Limitless (originally published as The Dark Fields), was released as a film in March 2011 by Relativity Media and as a TV series in 2015 by CBS. He is also the author ofWinterland; Bloodland, a Finalist for the Edgar Award for Best Paperback Original; Graveland; and his most recent novel, Paradime, is currently under option with ITV Studios America and One-Two Punch Productions. He lives in Ireland.

Praise For Paradime: A Novel…

"A paranoid conspiracy thriller with a significant twist...The result is a powerful psychological thriller of institutional corruption braided with ancient folkloric motifs."—The Irish Times (Best Crime Fiction of the Year)

"No one spins 21st Century facts into high-tech fantasies like Glynn."—Jane Ciabattari, BBC (Ten Books to Read This Month)

“As with all great novels, Paradime raises more questions than it answers...A pulsating tale from one of the most inventive practitioners working in contemporary crime fiction, a novel that pounds to the rhythms of the conventional thriller but employs its tropes to divert its protagonist, and the reader, down some very unusual dark alleyways.” —Declan Burke, The Irish Times

“Bristling with paranoia, this wheels-within-wheels conspiracy novel is both insidious and ingenious.” —Laura Wilson, The Guardian (UK)

“[Paradime] is a doppelganger tale of conspiracy and paranoia which starts in fourth gear, quickly revs up into fifth and thereafter roars along like an Exocet in agony...Suffice to say that it's his most inventive novel since [Limitless]—and arguably a more fascinating psychological-thriller-cum-tragedy.” —Crime Always Pays

“Deliciously creepy...The plot keeps moving with plenty of effective surprises, and the final chapters successfully navigate to an even darker tone.” —Kirkus Reviews

“Suspend your disbelief, and go along for a superfast, thoroughly enjoyable roller-coaster ride with Danny.” —Booklist

"A mesmerizing story that’s unexpectedly sinister and suspenseful. I enjoyed every bit of it...[Paradime] is the standout novel for me this year."—Avid Mystery Reader

“The novel's fever-dream narration is intoxicating, its first section in particular a kind of contemporary nightmare picaresque...Carefully constructed [and] full of epiphanies that shed shocking new light on earlier scenes.” —Detectives Beyond Borders

“Hugely relevant [and] undeniably compelling.” —Chris Pavone, author of The Expats and The Accident

“Scarily plausible...There are, as the publishers claim, echoes of John le Carré, 24, and James Ellroy here, but Glynn's talen is all his own.” —The Guardian (London)

“[Glynn] has a knack for depicting a shifting reality, partly by introducing us to characters who are already at their mental and emotional limits...His heroes exist in contemporary free fall, bracing themselves against whatever surface is available...Remarkable.” —Los Angeles Review of Books