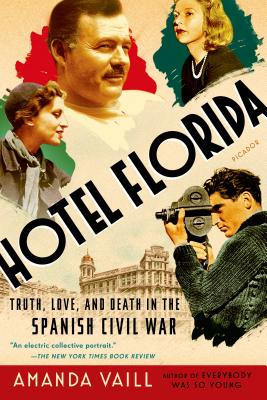 Truth, Love, and Death in the Spanish Civil War

"Whether or not you're a history buff, you'll be fully immersed in Vaill's chronicle of the band of journalists—including Ernest Hemingway and Martha Gellhorn—who covered the upheaval of the Spanish Civil War."—Entertainment Weekly

Madrid, 1936. In a city blasted by civil war, six people meet and find their lives changed forever. Ernest Hemingway, his career stalled, his marriage sour, hopes this war will give him fresh material and new romance; Martha Gellhorn, an ambitious novice journalist hungry for love and experience, thinks she will find both with Hemingway in Spain. Robert Capa and Gerda Taro, idealistic young photographers based in Paris, are inventing modern photojournalism as they capture history in the making. And Arturo Barea, Madrid's foreign press chief, and Ilsa Kulcsar, his Austrian deputy, are struggling to balance truth-telling with loyalty to their sometimes compromised cause—a struggle that places both of them in peril. Hotel Florida traces the tangled wartime destinies of these three couples against the backdrop of a critical moment in history.
From the raw material of unpublished letters and diaries, official documents, and recovered reels of film, Amanda Vaill has created a narrative of love and reinvention that is, finally, a story about truth: finding it out, telling it, and living it—whatever the cost.

Amanda Vaill is the author of  the bestselling Everybody Was So Young: Gerald and Sara Murphy—A Lost Generation Love Story, which was a finalist for the National Book Critics Circle Award in biography, and Somewhere: The Life of Jerome Robbins, for which she was awarded a Guggenheim fellowship. In addition to her screenplay for the Emmy– and Peabody Award–winning public television documentary Jerome Robbins: Something to Dance About, she has also written features and criticism for a range of journals from Allure to The Washington Post Book World. She lives in New York City.

Praise For Hotel Florida: Truth, Love, and Death in the Spanish Civil War…

“Whether or not you're a history buff, you'll be fully immersed in Vaill's chronicle of the band of journalists--including Ernest Hemingway and Martha Gellhorn--who covered the upheaval of the Spanish Civil War.” —Entertainment Weekly

“A vivid, well-paced story of the awfulness of war and of the complex motives of those who report on it.” —The Wall Street Journal

“Hotel Florida plunges us into the complex struggle that pitted the Spanish Republic against the rebel forces of General Francisco Franco . . . An ambitious, entertaining page-turner.” —Newsday

“Hotel Florida gathers literary giants among the international volunteers for Spain's civil war of everyday dreamers. In this masterful narrative, with unfailing judgment and artistry, Amanda Vaill captures heartache and obsession on a vast but intimate scale before the era of national-security states.” —Taylor Branch, author of The King Years

“A highly original, beautifully written, and utterly compelling account, by turns gripping and heartbreaking, of the intrepid--and sometimes crazy--journalists who risked everything to report on the Spanish Civil War.” —Amanda Foreman, author of The Duchess

“Combining a historian's meticulous research with her accomplished skills as a biographer, in Hotel Florida Amanda Vaill tells the fascinating interwoven stories of six people whose lives were forever changed as they fought for 'the last great cause.'” —Scott Donaldson, author of Hemingway vs. Fitzgerald

“A stunner--cinematic in scope and detail, and speaking urgently to questions of truth and betrayal that are still compelling today.” —Mary Dearborn, author of Mistress of Modernism

“The tragedy of the Spanish Civil War has never quite emerged from the fog of its own propaganda. In Hotel Florida, Amanda Vaill has dispelled that fog at last by telling the truth about three larger-than-life couples--men and women whose passion for one another mingled with the passions of war. It's a moving, powerful story--and nobody has ever told it better.” —Stephen Koch, author of The Breaking Point

“Hotel Florida is a riveting tale of politics, propaganda, and indifference, told with conviction and real heart.” —Brenda Wineapple, author of Ecstatic Nation

“Not since Orwell's Homage to Catalonia has there been so shattering a picture of the Spanish Civil War. A magisterial work of biography and history, Hotel Florida recounts a heartbreaking story with precision and passion. Page after page, Amanda Vaill writes scenes you will never forget.” —Marion Meade, author of Dorothy Parker

“Timely, powerful, enchanting. Amanda Vaill's compelling heroes, their allies and enemies, remind us why the Spanish Civil War remains the defining struggle of hope and betrayal, for activism and justice--across so many generations.” —Blanche Wiesen Cook, author of Eleanor Roosevelt