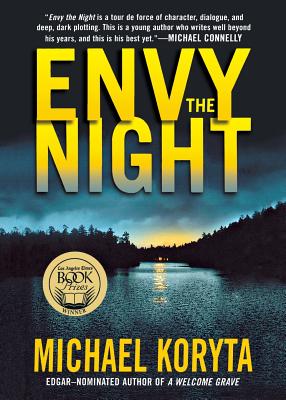 In the seven years since he learned that his U.S. marshal father lead a double life as a contract killer--and committed suicide to avoid prosecution--Frank Temple III has mostly drifted through life. But when he learns that Devin Matteson, the man who lured his father into the killing game only to later give him up to the FBI, is returning to the isolated Wisconsin lake that was once sacred ground for their families, it's a homecoming Frank can't allow.

Frank finds Matteson's old cabin occupied by a strange, beautiful woman and a nervous man with a gun. But when a pair of assassins arrives on their heels, he knows Matteson can't be far behind. The wise move would be to get out of town--but that doesn't feel right. After all, contract killer or not, Frank's father was at heart a teacher. And his son was an excellent student....

Michael Koryta's Envy the Night is the 2008 winner of the Los Angeles Times Book Prize for best mystery/thriller.

MICHAEL KORYTA's first novel, Tonight I Said Goodbye, was published when he was just twenty-one. He lives in Bloomington, Indiana, where he began working as a newspaper reporter and for a private investigator while still in high school. Tonight I Said Goodbye won the St. Martin's Press/Private Eye Writers of America Contest for first novel and the Great Lakes Book Award for best mystery, and was a finalist for the Edgar Award for best first novel. His other novels include Envy the Night (winner of the 2008 mystery/thriller Los Angeles Times Book Prize), The Silent Hour, and Those Who Wish Me Dead.

Praise For Envy the Night…

“Koryta is one of the best of the best, plain and simple.” —Michael Connelly

“With Envy the Night, Koryta earns a seat at the high table of neo-noir crime writers.” —The New York Times