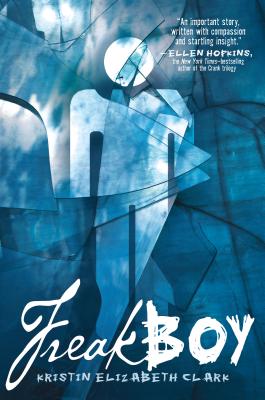 A powerful novel in verse told from the points of view of a genderqueer teenager, the teen's girlfriend, and a trans woman

“An important story, written with compassion and startling insight.” —Ellen Hopkins, The New York Times–bestselling author of the Crank trilogy

From the outside, Brendan Chase seems to have it pretty easy. Brendan is a star wrestler, a video game aficionado, and a loving significant other to seemingly perfect match, Vanessa.

But Brendan feels so wrong. Why does Brenan sometimes fantasize having long hair, soft skin, and gentle curves? Is there even a name for people like Brendan? People who are assigned male at birth but who sometimes want to be girls? Or is Brendan just a freak?

In Freakboy's razor-sharp verse, Kristin Clark folds three narratives into one powerful story: Brendan's exploration of gender; Vanessa, who fights to keep her and Brendan's relationship alive; and Angel, a woman who's struggling to confront her own demons.

Kristin Elizabeth Clark always knew she wanted to be a writer. She began dabbling in haiku in the third grade – this “experimentation” turned out to be a gateway to the harder stuff: book-length verse. She lives and writes in Northern California where she has worked as a child advocate within the juvenile justice system, and as a children’s theatre producer. She is a proud volunteer at Project Outlet in Mountain View, CA.  Freakboy is her young adult debut.
Loading...
or
Not Currently Available for Direct Purchase