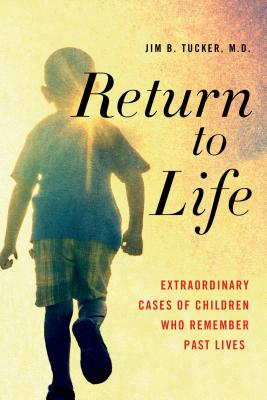 Extraordinary Cases of Children Who Remember Past Lives

A first-person account of Jim B. Tucker's experiences with a number of extraordinary children with memories of past lives, New York Times bestseller Return to Life expands on the international work started by his University of Virginia colleague Ian Stevenson. Tucker's work, lauded by the likes of parapsychologist Carol Bowman and Deepak Chopra, and described by some as quantum physics, focuses mostly on American cases, presenting each family's story and describing his scientific investigation. His goal is to determine what happened - what the child has said, how the parents have reacted, whether the child's statements match the life of a particular deceased person, and whether the child could have learned such information through normal means. Tucker has found case studies that provide persuasive evidence that some children do, in fact, possess memories of previous lives.

Among others, readers will meet a boy who describes a previous life on a small island. When Tucker takes him to that island, he finds that some details eerily match the boy's statements and some do not. Another boy points to a photograph from the 1930s and says he used to be one of the men in it. Once the laborious efforts to identify that man are successful, many of the child's numerous memories are found to match the details of his life. Soon after his second birthday, a third boy begins expressing memories of being a World War II pilot who is eventually identified.

Thought-provoking and captivating, Return to Life urges its readers, skeptics and supporters alike, to think about life, death, and reincarnation and to reflect about their own consciousness and spirituality.


Praise For Return to Life: Extraordinary Cases of Children Who Remember Past Lives…

“These incredible cases are not simply solid grounds for accepting some form of reincarnation into our Western worldview. These are heart-rending, poignant reminders that many of us do not quite ‘fit' into the cultural and religious worlds into which we are born. Obviously, we are more than these worlds. Way, way more.” —Jeffrey J. Kripal, author of Authors of the Impossible: The Sacred and the Paranormal

Jim B. Tucker, M.D. is a child psychiatrist at the University of Virginia, where he directs research into children's reports of past-life memories at the Division of Personality Studies and serves as Medical Director of the Child & Family Psychiatry Clinic. He is the author of Life Before Life and the New York Times Best Seller Return to Life.
Loading...
or
Not Currently Available for Direct Purchase