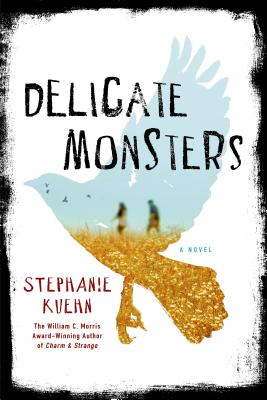 When nearly killing a classmate gets seventeen-year-old Sadie Su kicked out of her third boarding school in four years, she returns to her family's California vineyard estate. Here, she's meant to stay out of trouble. Here, she's meant to do a lot of things. But it's hard. She's bored. And when Sadie's bored, the only thing she likes is trouble.

Emerson Tate's a poor boy living in a rich town, with his widowed mother and strange, haunted little brother. All he wants his senior year is to play basketball and make something happen with the girl of his dreams. That's why Emerson's not happy Sadie's back. An old childhood friend, she knows his worst secrets. The things he longs to forget. The things she won't ever let him.

Haunted is a good word for fifteen-year-old Miles Tate. Miles can see the future, after all. And he knows his vision of tragic violence at his school will come true, because his visions always do. That's what he tells the new girl in town. The one who listens to him. The one who recognizes the darkness in his past.

But can Miles stop the violence? Or has the future already been written? Maybe tragedy is his destiny. Maybe it's all of theirs.

Delicate Monsters is Stephanie Kuehn at her finest.


Praise For Delicate Monsters: A Novel…

“Kuehn (Complicit) once again proves herself a talented writer in a tough, punishing novel about the damages we inflict on others and the shaky defenses we build to mask trauma and guilt.” —Publishers Weekly (starred review)

“Kuehn's prose intensifies in feeling with each page. Her characters' mental anguish and vulnerability take center stage, no excuses allowed, pain and rawness totally exposed. Sexual language and activity reveal the highs and lows of these teens on the edge of despair. A chilling look into heartache and reckless redemption-not for the faint of heart.” —Kirkus Reviews

“Kuehn writes with the fleetness of a trained thriller author...Explosive.” —Booklist (starred review) on Complicit

“Kuehn's second novel, after her Morris Award-winning Charm & Strange, powerfully examines how mental illness can turn into family tragedy that ripples far and wide beyond a single event. The prose is as hallucinatory as the madness Jamie seeks to uncover in a novel that's tense and ambiguous from start to finish.” —Publishers Weekly (starred review) on Complicit

STEPHANIE KUEHN holds degrees in linguistics and sport psychology, and is currently working toward a doctorate in clinical psychology. Charm & Strange is her debut novel. She lives in Northern California with her husband, their three children, and a joyful abundance of pets. When she’s not writing, she’s running. Or reading. Or dreaming.
or support indie stores by buying on