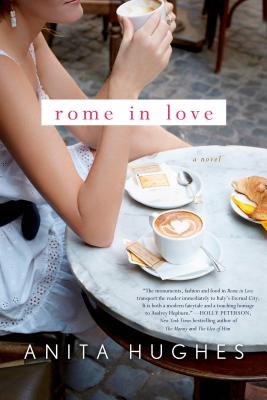 When Amelia Tate is cast to play the Audrey Hepburn role in a remake of Roman Holiday, she feels as if all her dreams have come true. She has a handsome boyfriend, is portraying her idol in a major motion picture, and gets to live in beautiful, Italian city of Rome for the next two months.

Once there, she befriends a young woman named Sophie with whom she begins to explore the city. Together, they discover all the amazing riches that Rome has to offer. But when Amelia's boyfriend breaks up with her over her acting career, her perfect world begins to crumble.

While moping in her hotel suite, Amelia discovers a stack of letters written by Audrey Hepburn that start to put her own life into perspective. Then, she meets Philip, a handsome journalist who is under the impression that she is a hotel maid, and it appears as if things are finally looking up. The problem is she can never find the right time to tell Philip her true identity. Not to mention that Philip has a few secrets of his own. Can Amelia finally have both the career and love that she's always wanted, or will she be forced to choose again?

With her sensory descriptions of the beautiful sites, decadent food, and high fashion of Rome, Hughes draws readers into this fast-paced and superbly written novel. Rome in Love will capture the hearts of readers everywhere.

ANITA HUGHES is also the author of Monarch Beach, Market Street, Lake Como, French Coast, Rome in Love, Island in the Sea, Santorini Sunsets, Christmas in Paris, White Sand, Blue Sea, and Emerald Coast. She attended UC Berkeley's Masters in Creative Writing Program, and lives in Dana Point, California, where she is at work on her next novel.

Praise For Rome in Love: A Novel…

“The monuments, fashion and food in Rome in Love transport the reader immediately to Italy's Eternal City. It is both a modern fairytale and a touching homage to Audrey Hepburn.” —Holly Peterson, New York Times bestselling author of The Manny and The Idea of Him

“Anita Hughes has a knack for developing winsome, accessible characters and putting them in the glitziest, most fabulous settings imaginable. Her latest, Rome in Love, is a delicious Italian escape into the life of ingénue Amelia Tate. Through the young actress's captivating voice, and that of the late, great Audrey Hepburn, Hughes delivers a fast-paced and moving tale about two women who want to hide but also discover themselves again. Perfect for book clubs and for anyone who loves Hollywood, old or new.” —Michelle Gable Bestselling author of A Paris Apartment

“It's the perfect Italian combination: Rome. St. Peter's Basilica. Pasta. Wine. A movie star, a little royalty, unimaginable wealth, glitter, glamour, and romance. Oh, and a touch of Audrey Hepburn. Rome In Love is an entertaining read that brings daydreams to the page.” —Cathy Lamb, author of What I Remember Most

“Those familiar with Roman Holiday and [Audrey] Hepburn will delight in the retelling... a charming love story....An enjoyable read for classic film and light romance fans” —Library Journal

“Another quintessential beach read...Full of lavish descriptions of food, libations, and fashion, Hughes' latest is a quick and pleasurable read that will transport readers to the lush dream of Rome.” —Booklist