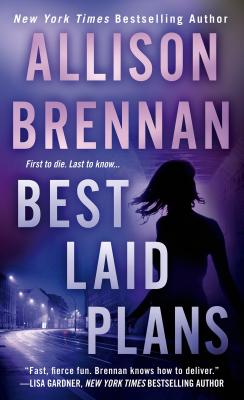 "Brennan [is] a master. The mystery [is] compelling and complex."—Associated Press

In Best Laid Plans, newly minted FBI Agent Lucy Kincaid is settling into her job in San Antonio, Texas, when the corpse of Harper Worthington, the husband of a sitting congresswoman, is found naked in a motel on the wrong side of town. It's up to Lucy to locate the last person to see him alive: a teenage prostitute who seems to have vanished into thin air.

When forensics determines that Harper was poisoned, Lucy and her new by-the-book partner dig deep into his life to find out who might want him dead. Why did Harper lie to his wife and his staff? Was he involved in an illicit affair? Embezzling money? Laundering money for a drug cartel? Or was he simply a pawn in someone else's dangerous game?

Lucy's boyfriend Sean Rogan is hired by Harper's company to run a security audit, causing friction between Lucy and the FBI. But when Sean finds a high-tech bug in Harper's office, an entirely new threat emerges—a far-reaching conspiracy run by a ruthless killer who will do anything to get what he wants, and kill anyone who gets in his way. And the person between him and victory is Lucy Kincaid.

“Gut-wrenching and chilling, this is a story you won't soon forget!” —RT Book Reviews (4½ stars) on Dead Heat

ALLISON BRENNAN is the New York Times and USA Today bestselling author of over forty novels, including the Lucy Kincaid and Max Revere series. She was nominated for Best Paperback Original Thriller by the International Thriller Writers and is a two-time winner of the Daphne du Maurier Award by Kiss of Death. Married for more than a quarter of a century, Allison and her husband Dan raised five children, and currently live in Arizona where they enjoy baseball's spring training and exploring the Grand Canyon.
Loading...
or
Not Currently Available for Direct Purchase