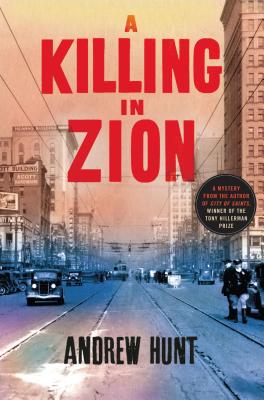 A Killing in Zion (Hardcover)

A Mystery (An Art Oveson Mystery #2)

In the scorching, drought-plagued summer of 1934, as wildfires burn across Utah, Detective Lieutenant Art Oveson faces a unique assignment. Salt Lake City's mayor has tapped him to revive the Anti-Polygamy Squad, a unit formed years earlier for the purpose of driving out the city's "plural marriage zealots." As a Mormon ashamed of his own ancestors' part in the church's polygamist past, Art is eager to do his part to flush out the extremists.

Then a local polygamist "prophet" is brutally murdered and a shell-shocked young girl is found at the scene of the crime. Is she the victim's daughter, a child bride, or the murderer herself? Art attempts to investigate the death, as well as discover her identity, despite a "wall of silence" put up by polygamists who would rather mete out their own rough justice. Soon, however, Art discovers that the sect has much more to hide than he thought.

Historian and Tony Hillerman Prize-winning author of City of Saints Andrew Hunt returns to 1930s Salt Lake City in this deeply researched mystery. A Killing in Zion portrays a city and a religion struggling to grow and shake off a notorious history that has not yet become a thing of the past.

ANDREW HUNT is a professor of history in Waterloo, Ontario. His areas of study include post-1945 U.S. History, the Civil Rights Movement, the Vietnam War, and the American West. He has written reviews for The Globe and Mail and The National Post, and he is the author of two works of nonfiction, The Turning and David Dellinger and is coauthor of The 1980s. He grew up in Salt Lake City, where his novel, City of Saints, is set, and he currently lives in Canada.

Praise For A Killing in Zion: A Mystery (An Art Oveson Mystery #2)…

“Hunt's excellent second mystery featuring Art Oveson lives up to the promise of his Hillerman Prize-winning debut, City of Saints (2012) ... Readers will cheer a hero who is not only a fine policeman but also a family man with a strong moral compass.” —Publishers Weekly (starred review) on A Killing in Zion

"Some authors excel at crafting compelling historical fiction, others at building, brick-by-brick, gripping mystery/police procedural plots. Andrew Hunt is crackerjack at both." —BookBrowse

“This engrossing historical debut is set in 1930 Salt Lake City and based on a true case. . . . The procedural steadily builds up steam and explodes in all the right places.” —Library Journal (starred review) on City of Saints

“Mixing in a terrifically paced plot and a memorable policeman hero . . .City of Saints is full of juicy twists that go deep into Mormon doctrine and travel as far as Hollywood.” —National Post (Canada) on City of Saints

“Terrific . . . Set in Salt Lake City in 1930 and based on the real-life murder of a wealthy socialite and aspiring Hollywood actress, the novel reveals a world of political pandering and murderous machinations that we usually associate with Chicago from this period.” —Journal Sentinel (Milwaukee) on City of Saints

“Hunt's first-person narrative in this gritty mystery is spot-on and conjures up a disturbing portrait of Salt Lake City's criminal underbelly in the midst of the Great Depression.” —Deseret News on City of Saints