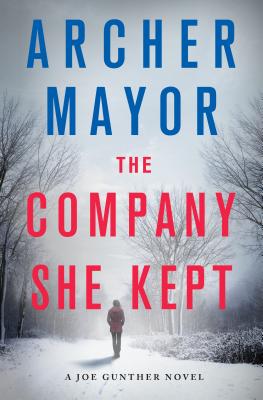 The Company She Kept

During the height of a harsh Vermont winter, the body of a woman is found hanging from the steel-mesh retaining net lining the cliffs along the interstate. She was brutally murdered, with the word "dyke" carved into her chest. She was also a state senator and best friend and ally of the current governor, Gail Zigman. At Zigman's personal request, Joe Gunther and his Vermont Bureau of Investigation team agree to help the Vermont State Police in their investigation before the victim's high profile and powerful friends create the inevitable publicity maelstrom.

Raffner was indeed a lesbian, and the word carved into her chest might be evidence of a hate crime, or it might be a feint designed to confuse and mislead investigators. But the question remains-what was she involved with, who wanted her dead, and what company was she keeping? What Gunther and his team discover during their initial investigation isn't the stuff of a simple murder. Someone killed a prominent figure and fabricated an elaborate scene for a purpose.

And this might only be the beginning...in Archer Mayor's The Company She Kept.


Praise For The Company She Kept: A Joe Gunther Novel (Joe Gunther Series #26)…

"Mayor does a good job dramatizing the political and cultural conflicts, but it’s the special push-the-envelope talents of Gunther and his team that make this series so enjoyable." - Publishers Weekly

''Another fine entry in a series that has been engaging crime devotees for more than a quarter century.'' - Booklist

"Mayor does for Vermont what Tony Hillerman does for Arizona, showing readers the mixed cultures of a remote place and how its harsh yet glorious environment influences their lives - and crimes." - New York Journal of Books