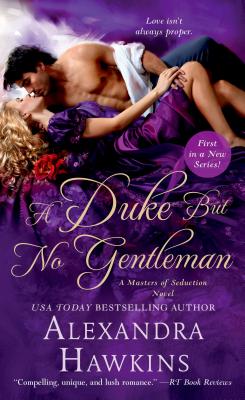 A Duke but No Gentleman

A Masters of Seduction Novel

In the last opulent days of the eighteenth century, a friendly wager turns into a heated feud that spans decades...and a love affair like none other.

What does it take to tempt a lady...
London, 1792. The Duke of Blackbern and the Marquess of Norgrave are boyhood friends who will still compete at anything. Racing, drinking, gambling, even seduction-until Lady Imogene Sunter crosses their path. Achingly beautiful, and innocent, she has no understanding of the jaded gentlemen who are courting her for favors-of how far they are willing to go to get what they want...

In this game of seduce and destroy?
Fighting for Imogen's affection should have been no more than their usual spirited rivalry. But when Blackbern discovers his feelings for Imogen have deepened, all bets are off. Norgrave, driven by his own demons, won't forsake his pride-and with one shocking act of betrayal that threatens Imogen and Blackbern's newfound desire, Norgrave will set the course for a generation of Regency bad boys who will go down in history as the Masters of Seduction...in A Duke But No Gentleman by Alexandra Hawkins.


Praise For A Duke but No Gentleman: A Masters of Seduction Novel…

Alexandra Hawkins is the author of the Lords of Vice Novels—All Night with a Rogue, Till Dawn with the Devil, and After Dark with a Scoundrel. An unrepentant Anglophile, she discovered romance novels as a teenager, and knew that one day she would be writing her own stories. She has combined her love of English history, mythology, and romance to create sensual character-driven stories that she hopes will touch readers’ hearts. She lives in Georgia with her husband and three children.
Loading...
or
Not Currently Available for Direct Purchase