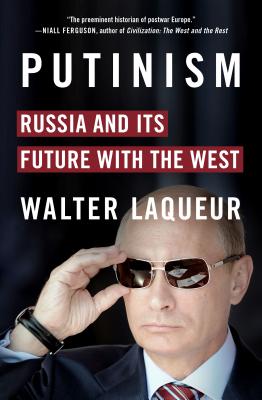 Russia and Its Future with the West

There is no question that tensions between Russia and America are on the rise. The forced annexation of Crimea, the downing of Malaysia Airlines flight 17, and the Russian government's treatment of homosexuals have created diplomatic standoffs and led to a volley of economic sanctions. In America, much of the blame for Russia's recent hostility has fallen on steely-eyed President Vladimir Putin and many have begun to wonder if they we are witnessing the rebirth of Cold War-style dictatorship.

Not so fast, argues veteran historian Walter Laqueur.
For two decades, Laqueur has been ahead of the curve, predicting events in post-Soviet Russia with uncanny accuracy. In Putinism, he deftly demonstrates how three long-standing pillars of Russian ideology-a strong belief in the Orthodox Church, a sense of Eurasian "manifest destiny," and a fear of foreign enemies-continue to exert a powerful influence on the Russian populous. In fact, today's Russians have more in common with their counterparts from 1904 than 1954 and Putin is much more a servant of his people than we might think.
Topical and provocative, Putinism contains much more than historical analysis. Looking to the future, Laqueur explains how America's tendency to see Russia as a Cold War relic is dangerous and premature. Russia can and will challenge the West and it is in our best interest to figure out exactly who we are facing-and what they want-before it is too late.

WALTER LAQUEUR served as the director of the Institute of Contemporary History in London and concurrently the chairman of the International Research Council of CSIS in Washington for 30 years. He was also a professor at Georgetown University and the author of more than twenty-five books on Europe, Russia, and the Middle East. He has had articles published in The New York Times, The Washington Post, and countless other newspapers worldwide. His books include The Last Days of Europe and After the Fall.

Praise For Putinism: Russia and Its Future with the West…

“An aptly timed and much needed look at the mercurial master of the Kremlin” —Peter Baker, New York Times

“An erudite and unsettling but convincing argument that the new Russia is a dictatorship 'approved by the majority as long as the going is good,' and if Putin were to vanish today, his successor would make few changes.” —Kirkus Reviews (starred review)

“Laqueur is grimly convincing in lowering expectations that Russia will become genuinely democratic any time soon. This thorough examination of all aspects of modern Russian society and culture makes an excellent addition to recent literature on Putin-era Russia.” —Publishers Weekly