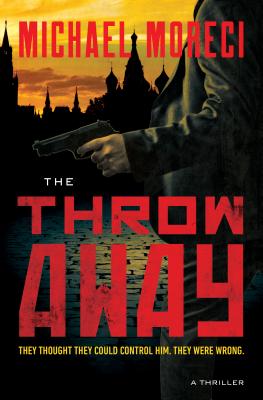 THROWAWAY [throh-uh-wey] – Noun - An agent who is considered expendable.

Mark Strain had it all: beautiful wife, a baby on the way, and a skyrocketing career as a D.C. lobbyist. But when Mark is violently abducted from his home by masked men, everything he knows is turned upside down.

They say Mark committed treason. They say he's a traitor to the United States.

They say he's a spy.


Praise For The Throwaway: A Thriller…

"Michael Moreci bursts on the scene with an adrenaline-fueled thriller coupling high stakes international intrigue with a gripping domestic storyline. The pages fly by as if on autopilot--an absolute must-read!" —Ward Larsen, USA Today bestselling author of Assassin's Run

"Michael Moreci has written a story that feels both classic and contemporary. The Throwaway hits close to home in our current climate. Maybe too close . . ." —Alex Tse, screenwriter of Watchmen

MICHAEL MORECI is a novelist and author of comic books, who was recently named in Newcity Lit's "Lit 50: Who Really Books in Chicago 2018." His comics include the critically acclaimed sci-fi trilogy Roche Limit and the military horror drama Burning Fields. He's also written Suicide Squad for DC, Planet of the Apes for Boom!, and his other original titles include Curse, Hoax Hunters, ReincarNATE, and Black Hole Repo. As a novelist, Michael is the author of Spy Swap, an espionage thriller for Tor/Forge. He lives in Chicago with his wife, two sons, and dog.
or
Not Currently Available for Direct Purchase