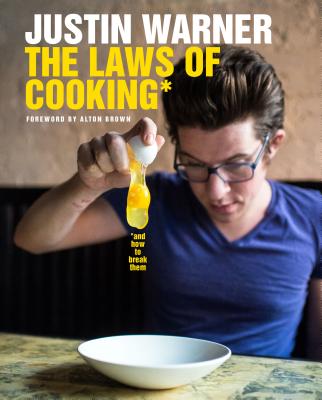 The Laws of Cooking (Hardcover)

And How to Break Them

The Laws of Cooking . . . and How to Break Them encourages improvisation and play, while explaining Justin Warner's unique ideas about "flavor theory"-like color theory, but for your tongue. By introducing eleven laws based on familiar foods (e.g., "The Law of Peanut Butter and Jelly"; "The Law of Coffee, Cream, and Sugar"), the book will teach you why certain flavors combine brilliantly, and then show how these combinations work in 110 more complex and inventive recipes (Tomato Soup with "Grilled Cheese" Ravioli; Scallops with Black Sesame and Cherry). At the end of every recipe, Justin "breaks the law" by adding a seemingly discordant flavor that takes the combination to a new level.

JUSTIN WARNER is the winner of the eighth season of Food Network Star and is the chef/co-owner of Michelin-rated Do or Dine restaurant in Bed-Stuy, New York. His first Food Network appearance was on 24 Hour Restaurant Battle in 2010, which he also won. He continues to be a frequent guest on Food Network and hosts Foodie Call, a new Food Network web series. Warner was a waiter at Danny Meyer's acclaimed restaurant The Modern prior to starting his own career as a chef.

Praise For The Laws of Cooking: And How to Break Them…

“This is a cookbook unlike any other. This kid may be an outlaw but . . . the culinary force is strong with this one. And now, he's sharing a bit of that crazy magic with us all. So hang on, kids, it's going to be a tasty ride.” —Alton Brown, from his foreword

“Justin Warner is an original. He plays by no one's rules and writes his own 'laws.' The guy put foie gras donuts on the map. That alone is enough for us to pay very close attention to what he's cooking.” —Bobby Flay

“The Laws of Cooking combines Justin Warner's limitless culinary curiosity with his innate understanding of what makes food delicious. While his first quirky appearances on The Food Network convinced me that he was a very welcome addition to an increasingly homogenous culinary scene, this book convinces me that he may just be one of those rare few chefs who can change how we think about food entirely.” —Simon Majumdar

“Justin has all the makings of a truly original chef. He's highly skilled, very intelligent, has a calm control over his nerves, and most importantly, he's got guts! I knew from the first time I met him, that he was a rebel through and through. On Food Network Star, he always kept me curious and excited as to what he would come up with next, and he continues to do so! This cookbook is a perfect example of Justin's true essence, and his specific voice as a chef: To master the 'laws' of cooking, so he can break them, in the most surprising and delicious ways!” —Giada De Laurentiis

"A round of applause for chef Justin Warner, winner of The Next Food Network Star and Brooklyn-based chef of the rave-worthy, dearly departed Do or Dine. His new book, The Laws of Cooking (And How to Break Them) is a love letter to breaking the mold....This book blew our minds so many times in such outstanding ways." —Food Republic