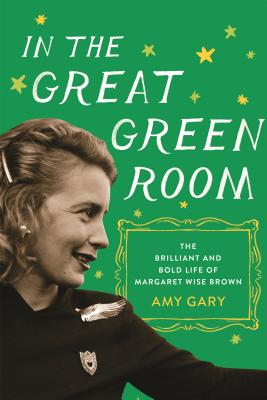 In the Great Green Room

The Brilliant and Bold Life of Margaret Wise Brown

The extraordinary life of the woman behind the beloved children’s classics Goodnight Moon and The Runaway Bunny comes alive in this fascinating biography of Margaret Wise Brown. Margaret’s books have sold millions of copies all over the world, but few people know that she was at the center of a children’s book publishing revolution. Her whimsy and imagination fueled a steady stream of stories, book ideas, songs, and poems and she was renowned for her prolific writing and business savvy, as well as her stunning beauty and endless thirst for adventure.

Margaret started her writing career by helping to shape the curriculum for the Bank Street School for children, making it her mission to create stories that would rise above traditional fairy tales and allowed girls to see themselves as equal to boys. At the same time, she also experimented endlessly with her own writing. Margaret would spend days researching subjects, picking daisies, cloud gazing, and observing nature, all in an effort to precisely capture a child’s sense of awe and wonder as they discovered the world.

Clever, quirky, and incredibly talented, Margaret embraced life with passion, lived extravagantly off of her royalties, went on rabbit hunts, and carried on long and troubled love affairs with both men and women. Among them were two great loves in Margaret’s life. One was a gender-bending poet and the ex-wife of John Barrymore. She went by the stage name of Michael Strange and she and Margaret had a tempestuous yet secret relationship, at one point living next door to each other so that they could be together. After the dissolution of their relationship and Michael’s death, Margaret became engaged to a younger man, who also happened to be the son of a Rockefeller and a Carnegie. But before they could marry Margaret died unexpectedly at the age of forty-two, leaving behind a cache of unpublished work and a timeless collection of books that would go on become classics in children’s literature.

In In the Great Green Room, author Amy Gary captures the eccentric and exceptional life of Margaret Wise Brown, and drawing on newly-discovered personal letters and diaries, reveals an intimate portrait of a creative genius whose unrivaled talent breathed new life in to the literary world.


Praise For In the Great Green Room: The Brilliant and Bold Life of Margaret Wise Brown…

"In a biography full of lively anecdotes, this one stands out for the way it encapsulates what must have made Margaret Wise Brown so enchanting to her friends and colleagues.... If the measure of a good life story is the longing it leaves in the reader to have known the subject, this one more than succeeds." —The Wall Street Journal

"Margaret Wise Brown's story reads as a stirring evocation of a woman who insisted on freedom in her art and in her love life." —USA Today

"In the Great Green Room brings renewed attention to the contrast between Margaret Wise Brown's private life and her status as a celebrated children's author. Drawing on personal letters and diaries, author Amy Gary draws a colorful portrait." —The Washington Post

"Gary has used her unrivaled familiarity with the author's life and times to craft a vivid portrait.... Gary smoothly intertwines the story of the writing of these now-classic books with the complicated and often tumultuous twists of Brown's personal life, and the effect is both intimate and revelatory." —The Christian Science Monitor

“Goodnight Moon is less a story than an incantation. It summons a cocoon around reader and listener, a sensation of being pulled out of the hurly-burly of the world into a pocket of charmed tranquility. Amy Gary’s new biography, In the Great Green Room: The Brilliant and Bold Life of Margaret Wise Brown, replicates this spell for adult readers.” —Slate

"Margaret Wise Brown's life—from her revolutionary career to her scandalous love affairs—is offered up to readers and makes for great storytelling—bedtime or otherwise."—Town & Country Magazine

"Amy Gary's In the Great Green Room is as brilliant and bold as the literary life she chronicles. The amazing story of Margaret Wise Brown will inspire readers and all those who would aspire to a Writer's life." —Terrance G. Finley, Books-A-Million President's Pick

"Gary adds to the portrait we have of [Margaret Wise Brown] with never-before-seen materials she uncovered in 1990, including manuscripts, diaries, and letters." —Publishers Weekly

"For children's literature buffs and fans of intriguing biographies, In the Great Green Room is a must read." —BookPage

"Through Amy Gary's fascinating biography, readers can meet the woman who created [Goodnight Moon], and learn of her remarkable and quite unusual life." —Bookreporter.com

"Measured, wise, and thrilling in its clarity, Amy Gary's In the Great Green Room animates for readers an extraordinary life devoted to satisfying every curiosity and deepening every meaning. Not content with the cosmos as she found them, Margaret Wise Brown renamed the stars until she knew them on her terms. In her generous books, she gave this magical power of recreation to generations of children and their parents. Now, Amy Gary has extended this same gift to Brown." —Tracy Daugherty, author of The Last Love Song: A Biography of Joan Didion

“Amy Gary’s In the Great Green Room is a true discovery…. Drawing on unpublished manuscripts, Gary’s narrative is informative as it is riveting, creating a lively portrait of a woman writer and editor who deserves to be widely known for her work, while [Margaret Wise] Brown’s impulsive desire and emotional vulnerability creates moments that ultimately leave the reader with a sense of both exuberant uplift and haunting loss.” —Irene Gammel, author of Looking for Anne of Green Gables

"What a fascinating (and at times melancholy) life.... The author's writing style was captivating and moving...I couldn't stop reading about this extraordinary woman and wished she had received the attention and acclaim she deserved. And a tragic ending of her life and a missed opportunity to finally be happy in a relationship brought me to tears.... [This book] would be an inspiration to anyone wanting to become a writer." —Robin Beerbower, EarlyWord.com

In 1990, AMY GARY discovered hundreds of unpublished works by Margaret Wise Brown in Margaret's sister's attic. Since then, Gary has catalogued, edited, and researched all of Brown's writings. She has been covered in Vanity Fair, in Entertainment Weekly, and on NPR, among other media outlets. She was formerly the director of publishing at Lucasfilm and headed the publishing department at Pixar studios.
Loading...
or
Not Currently Available for Direct Purchase