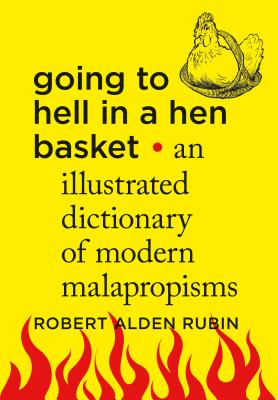 Going to Hell in a Hen Basket

An Illustrated Dictionary of Modern Malapropisms

Malapropism - A word or phrase that has been mistaken for another, usually because of its sound rather than its meaning.

Everyone has made the mistake of using a word or phrase that they think sounds correct, but in fact is not. Malapropisms make some sense. They have a semantic logic to them, even if that logic makes perfect nonsense. In Going to Hell in a Hen Basket, author Robert Alden Rubin delights in the creative misuse of words and celebrates the verbal and textual flubs that ignore the conventions of proper English.

Culled from blogs, the deepest corners of the internet, as well as some of the most esteemed publications, here is a collection of classic malapropisms paired with hilarious illustrations.

· adieu, without further - Conflation of bidding adieu (saying goodbye) with ado (complicated doings, ceremony) to mean "without saying anything more."
· feeble position - An unborn child in a fetal position seems weak and helpless, which explains the confusion here. The two words also share some sexist cultural and literary associations. Feeble (weak) originates from a Latin word for something to be wept over; fetal (relating to a fetus) originates from the same preliterate Indo-European word that gives us female.
· hone in on - Confuses expressions such as finely honed with home in on or zero in on (focus on, locate) and sometimes with horn in on (intrude upon). Homing, as pigeons perform it, often involves flying in narrowing circles until the target is reached. Hone means to sharpen; the malapropism conveys the sense of a carefully sharpened instrument and sometimes cutting in.

Perfect for bookworms and wordsmiths, the point here isn't to shame the malapropagandists, but to delight in the twists and turns writers put our language through and to amuse and inform those of us who care about words.


Praise For Going to Hell in a Hen Basket: An Illustrated Dictionary of Modern Malapropisms…

"The particular pleasure that one gets when one discovers a malapropism in the wild comes in part from ferreting out the logic that underlies it. These entries from Robert Alden Rubin’s new book Going to Hell in a Hen Basket: An Illustrated Dictionary of Modern Malapropisms attempt to do just that, where it can be deduced and to offer speculation where it can’t." —Grammar Girl
"Going to Hell in a Hen Basket...offers readers a pain staking but hilarious journey amidst the strings and arrows of language misfortune.... Not only does Rubin bare witness to these word-garblers who seemingly grew up speaking pigeon English, but he sets the goal standard, by honing in on the etymology of these linguistic egg corns, whether it be a case of pesky sound-alikes or deep-seeded hearing difficulties.... The result is the perfect gift book for word nerds...chalk full of philological humor.... Trust me, you'll double over into a feeble position at some of these not-so-bon-mots." —Brevity magazine

ROBERT ALDEN RUBIN holds an M.A. in creative writing from Hollins College, and a Ph.D. in English Literature from the University of North Carolina. He worked as a journalist, is an English instructor at Meredith College, and was an editor for Algonquin Books of Chapel Hill. He lives near Raleigh, North Carolina, with his wife.
Loading...
or
Not Currently Available for Direct Purchase