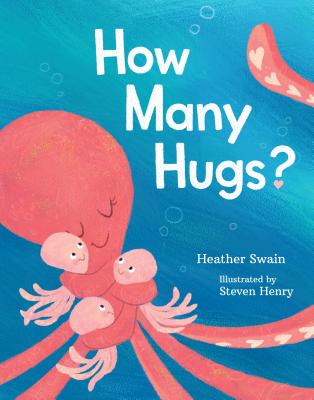 All the ways that animals and multi-legged insects give hugs, How Many Hugs? is perfect as a counting picture book and for reading aloud at bedtime!

Centipedes, those crawliest bugs
have 300 legs for giving out hugs.
That's 150 on one side to grasp
and 150 on the other to clasp.

Hugs abound in this celebration of multi-legged animals and insects and their babies! And at the end of the day, human parents can give their little ones as many hugs as they want—with two arms.

Charming art and rhyming text make this a perfect companion to All Kinds of Kisses, also by Heather Swain.


Praise For How Many Hugs?…

"Do more arms mean better hugs? That’s the question raised in this lighthearted contemplation of animal intimacy, Swain and Henry’s follow-up to All Kinds of Kisses. ...charming."--Publishers Weekly


Praise for All Kinds of Kisses:

"Swain invites readers to contemplate the types of kisses 11 animals might bestow on each other, based on their distinctive mouths, beaks, tongues, and jaws. ... What is consistent is the tenderness between the adult animals and their offspring, as captured in Henry's (It's Raining Bats and Cats) rough-edged, mid-20th-century-retro portraits. A closing spread offers additional details about the sun bears, porpoises, chubsuckers, and other features creatures." —Publishers Weekly

Steven Henry is the illustrator of the beloved Ella the Elegant Elephant books (as Steven D'Amico), written by Carmela D'Amico, and Hanukkah Hop, written by Erica Silverman. His work has also appeared on PBS Kids, Nick Jr., and the Disney Channel. He lives in Seattle, Washington.

Heather Swain's books for young readers include Me, My Elf and I, and Josie Griffin Is Not a Vampire. Hungry is her first novel for teens. She lives in Brooklyn, New York, with her family.
Loading...
or
Not Currently Available for Direct Purchase