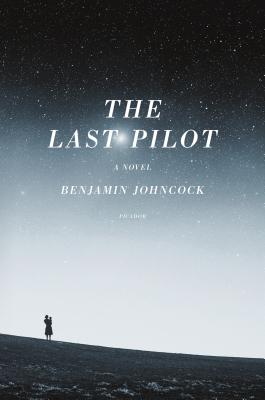 "Harrison sat very still. On the screen was the surface of the moon."

Jim Harrison is a test pilot in the United States Air Force, one of the exalted few. He spends his days cheating death in the skies above the Mojave Desert and his nights at his friend Pancho's bar, often with his wife, Grace. She and Harrison are secretly desperate for a child-and when, against all odds, Grace learns that she is pregnant, the two are overcome with joy.

While America becomes swept up in the fervor of the Space Race, Harrison turns his attention home, passing up the chance to become an astronaut to welcome his daughter, Florence, into the world. Together, he and Grace confront the thrills and challenges of raising a child head-on. Fatherhood is different than flying planes-less controlled, more anxious-however the pleasures of watching Florence grow are incomparable. But when his family is faced with a sudden and inexplicable tragedy, Harrison's instincts as a father and a pilot are put to test. As a pilot, he feels compelled to lead them through it-and as a father, he fears that he has fallen short.

The aftermath will haunt the Harrisons and strain their marriage as Jim struggles under the weight of his decisions. Beginning when the dust of the Second World War has only just begun to settle and rushing onward into the Sixties, Benjamin Johncock traces the path of this young couple as they are uprooted by events much larger than themselves. The turns the Harrisons take together are at once astonishing and recognizable; their journey, both frightening and full of hope. Set against the backdrop of one of the most emotionally charged periods in American history, The Last Pilot is a mesmerizing debut novel of loss and finding courage in the face of it from an extraordinary new talent.


Praise For The Last Pilot: A Novel…

“Although he's a young writer in England, Johncock re-creates the early days of the U.S. space program like someone who lived through them....Flying through these pages, you'll recall that dynamic era when a mix of physical science and political anxiety propelled the United States to unprecedented speeds....But if these guys have the right stuff, they also have personal lives that burn as dangerously, and that tension makes The Last Pilot hypnotic....The effect is supercharged Hemingway at 70,000 feet.” —Ron Charles, The Washington Post

“A remarkable achievement... [readers] will surely find comfort in these pages, lit by the fire of 1960s adventure, and also by the blazing beauty of a new literary star.” —The Boston Globe

“[The Last Pilot] transports readers to a time of Scotch-soaked bars, Walter Cronkite on the news, and astronauts as superheroes...Ingeniously plotted, deftly written, and engrossing.” —People, Best New Books

“[A] spare gem of a novel...Johncock is superb at crafting suspenseful scenes. The pioneering astronaut days, and Cold War moments like the Cuban missile crisis, offer a suitable backdrop for his dramatic tale.” —Jane Ciabattari, BBC.com (Ten Books to Read in July)

“Johncock writes spare sentences, each diamond-like, free of any cloudiness caused by extra words. The prose is beautiful...It takes a confident writer to cover material that Tom Wolfe defined as his own in The Right Stuff. Benjamin Johncock proves that he has the chops to put his own spin on the matter in The Last Pilot.” —Salon

“The story is well paced and chock full of an array of inspirational characters, but the London-based writer's greatest attribute is the exuberant life beaming from the gorgeous prose....The seemingly simplistic exchanges, that reveal plenty with few words, are reminiscent of the great Cormac McCarthy...Benjamin Johncock has written one of the most American novels of the year.” —The Huffington Post

“Reading Johncock one is reminded of Hemingway, Cormac McCarthy, and especially of James Salter's The Hunters.... his mastery of the American idiom is perfect. This is a first-rate novel by a major new talent.” —The Spectator (UK)

“A test pilot pushing the sound barrier. A husband consoling his childless wife. An astronaut training for the impossible...In Benjamin Johncock's debut novel, protagonist Jim Harrison is all of those men. Spanning the aftermath of World War II to the '60s, The Last Pilot offers a heart-wrenching tale of loss and discovery during the infamous Space Race.” —Paste Magazine, Best New Book of the Month

“With great skill (and some nerve), Benjamin Johncock has inserted his fiction into the true history of the Mercury and Gemini space programs of the 50s and 6os....and it's almost impossible to see the join.” —The Guardian (London)

“The Last Pilot may be Benjamin Johncock's first book, but it reads like he's a seasoned pro, with descriptions and dialogue so rich that it's impossible not to get invested in the book's characters...You may cry, but this story is worth every tear.” —Metro

“Whether or not you’re a space exploration enthusiast, you’ll likely find much to admire in Benjamin Johncock’s debut novel, The Last Pilot. It’s one of those terrific reads that deliver a compelling story against an interesting historical backdrop, in this case, the Space Race and the origins of the American space program…Congratulations to Mr. Johncock on having crafted a stellar debut that very much deserves a wide audience.” —Pittsburgh Post-Gazette

“A taut domestic drama whose stringent prose evokes the emotional and physical landscape of a time and a place, this is a remarkably accomplished debut.” —The Daily Mail, Mail on Sunday

“Written in sparse, quick prose that balances sadness and action, The Last Pilot is a stunning debut that is as engrossing and profound as it is entertaining.” —Jarret Middleton, Shelf Awareness

“[An] impressive debut...Jim's story is fascinating, and the author writes with a strong ear for dialogue, which rattles the pages with intensity. A marvelous, emotionally powerful novel.” —Publishers Weekly, starred + boxed review

“While realistically describing the struggles Harrison faces in finding the courage to transcend a personal tragedy in the service of his country, Johncock also draws on true-life historical details to tell, in beautifully measured prose, a riveting good yarn.” —Booklist

“A quick read with punchy, spare dialogue that makes the action pop. Johncock strikes just the right balance, marrying facts and real life people with fictitious characters...A contemplative book that will spark many a conversation.” —The Missourian

“This first novel is engaging and believable, and it's compelling to revisit the events of the space program.” —Library Journal

“The dialogue is clean and smooth, and Johncock's spare prose gallops along at a fair pace.” —Herald Scotland

“I read The Last Pilot in a single sitting, drawn into this story of a couple's journey through love and grief as it unfolds during the tense early days of the Space Race. Told in language as beautifully spare-and unsparing-as a desert or a moonscape, The Last Pilot reminds us in powerful ways that the real unknown frontier still lies within the mysteries of the human heart.” —Kim Edwards, No. 1 New York Times bestselling author of The Lake of Dreams and The Memory Keeper’s Daughter

“This is by far the best debut novel I've read in years. You can read about the plot elsewhere, but for me, the beauty of this novel is in the balance of the dialogue; the sustained emotion that runs through the whole; the haiku-like simplicity of the prose (and trust me, it takes a long, long time to create that sense of effortlessness). Like so many of America's stories, this is a Western in disguise; a quiet, limpid Western, where the action mostly takes place in the air and in the chambers of the heart. To me, it reads like the reclusive disciple of Cormac McCarthy and de Saint-Exupéry.” —Joanne Harris, New York Times bestselling author

“Benjamin Johncock is a writer of great craft and integrity. His dialogue is desert-dry, and his sentences crackle with the energy of things unsaid. With The Last Pilot, he has done something remarkable: In a novel about the achievements of the Space Race, he has shown us that true heroism lies in doing the right thing behind the closed doors of home. Wonderful stuff.” —Jon McGregor, author of If Nobody Speaks of Remarkable Things

“A confident, engrossing debut novel with great warmth and a real sense of time and place.” —A.L. Kennedy, author of The Blue Book and All the Rage

“Carver is the obvious influence, but this is no mere imitation. The writing is machine-cut and spare, understated and taciturn, and like the pilots at this story's center, Johncock has dared to reach for the stars.” —D.W. Wilson, author of Ballistics and Once You Break a Knuckle

BENJAMIN JOHNCOCK was born in England in 1978. His short stories have been published by The Fiction Desk and The Junket. He is the recipient of an Arts Council England grant and the American Literary Merit Award, and is a winner of Comma Press's National Short Story Day competition. He also writes for the Guardian. He lives in Norwich, England, with his wife, his daughter, and his son. The Last Pilot is his first novel.

atmospheric descriptions of the desert landscape. Why

do you think he dedicates so much space to describing

Pancho is one of the novel’s most colorful characters and

is based on real-life figure, Florence Lowe “Pancho” Barnes. In what

ways is Pancho a woman ahead of her time?

Why does Grace keep her visits with Reverend Irving a secret from Jim?

The Last Pilot is framed by historical events: the Cold War, the Cuban

Missile Crisis, and the Space Race. How does this historical context

affect your reading of the novel? Are you drawn to novels that are

based on true stories?

After Florence is born, Jim begins to learn what it means to be a

into him, not the volume, or the sound, but the need.” What was it

insists on going through with his scheduled flight test even though

Riley urges him to “call it a day.” Why do you think Jim insists on going

through with the flight test? What insights into Jim’s character does

landing mission if Florence had lived?

During the height of the Cuban Missile Crisis, Grace asks Jim to stay

program. When he refuses, she asks him if he thinks the program is

more important than her, to which he replies, yes. Do you agree with

Jim? Why or why not?

As Jim’s mental state begins to unravel, he starts to believe that he

killed Florence. Do you place any blame on Jim for Florence’s death?

The novel ends on Christmas Eve, 1968. Jim and Grace are watching a

entire Earth from space. Why do you think Johncock ends with this