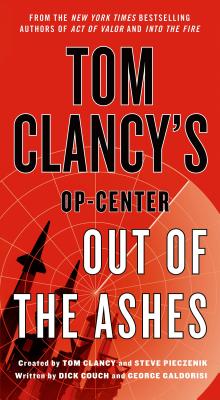 Out of the Ashes

"A smoothly written story by two authors who understand the inner workings of U.S. intelligence, government, and the military, and tell a frightening and exciting tale about a very new, but also a very old threat."-Larry Bond, New York Times bestselling author of Dangerous Ground

Before 9/11, America was protected by a covert force known as Op-Center. The charter was top secret, and the team reported directly to the president. They used undercover operatives with SWAT capabilities to defuse crises around the world, and they were tops in their field. But after the World Trade Center disaster, Op-Center was disbanded-leaving the country in terrible danger.. .

OUT OF THE ASHES

When terrorists detonate bombs in sports stadiums around the country-leaving men, women, and children dead or mutilated-the president executes an emergency order to reboot Op-Center. This latest, upgraded version is capable of dealing with the high-tech crises of the twenty-first century-like the lethal one brewing in the Middle East. A renegade Saudi prince with ambitions of controlling the world's oil supply has an ingenious plot to manipulate America into attacking Syria and launching a war against Iran. Next, they would ignite a sleeper cell to attack the American homeland, resulting in a bloodbath unlike any other. Only the men and women of Op-Center realize the terror about to be unleashed. Only they have the courage to issue a warning no one wants to hear. But will anyone believe them?

DICK COUCH graduated from the Naval Academy in 1967 and served as a Surface Warfare Officer and SEAL Platoon Commander in Vietnam. Dick has enjoyed a unique relationship with the US Special Operations Command and has been allowed to document the special operations training venues for SEALs, Army Special Forces (Green Berets), Rangers, and Marines. He is a co-author of the Tom Clancy's Op-Center series. He has been a professor at the US Naval Academy where he taught ethics and is often called on to speak to issues of character, moral battlefield conduct, and training and deployment of American military special operations forces. He lives with his wife Julia in central Idaho.

GEORGE GALDORISI is a career naval aviator. His Navy career included four command tours and five years as a carrier strike group chief of staff. He has written several books, including (with Dick Couch), the New York Times best seller, Tom Clancy Presents: Act of Valor; The Kissing Sailor, which proved the identity of the two principals in Alfred Eisenstaedt's famous photograph; and over 200 articles in professional journals and other media. He is the Director of the Corporate Strategy Group at the Navy's C4ISR Center of Excellence in San Diego, California. He and his wife Becky live in Coronado, California.

Steve Pieczenik is an author and co-creator of Tom Clancy's Op-Center series.

Praise For Tom Clancy's Op-Center: Out of the Ashes…

“The U.S intelligence agencies have spent billions since 9/11 learning how to ‘connect the dots.' But what if there are only one or two dots? Out of the ashes is a smoothly written story by two authors who understand the inner workings of U.S. intelligence, government, and the military, and tell a frightening and exciting tale about a very new, but also a very old threat.” —Larry Bond, New York Times bestselling author of Dangerous Grounds

“Op-Center is back with a vengeance! OUT OF THE ASHES isn't just a reboot of the Op-Center series; it's one of the best techno-thrillers to hit the shelves in a long time. Dick Couch and George Galdorisi have just raised the bar for military adventure fiction. Suit up, strap in, and hang on, because you're in for one hell of a ride.” —Jeff Edwards, bestselling author of The Seventh Angel and Sword of Shiva