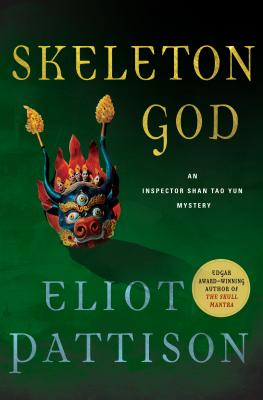 In Eliot Pattison's Skeleton God, Shan Tao Yun, now the reluctant constable of a remote Tibetan town, has learned to expect the impossible at the roof of the world, but nothing has prepared him for his discovery when he investigates a report that a nun has been savagely assaulted by ghosts. In an ancient tomb by the old nun lies a gilded saint buried centuries earlier, flanked by the remains of a Chinese soldier killed fifty years before and an American man murdered only hours earlier. Shan is thrust into a maelstrom of intrigue and contradiction.

The Tibetans are terrified, the notorious Public Security Bureau wants nothing to do with the murders, and the army seems determined to just bury the dead again and Shan with them. No one wants to pursue the truth–except Shan, who finds himself in a violent collision between a heartbreaking, clandestine effort to reunite refugees from Tibet separated for decades and a covert corruption investigation that reaches to the top levels of the government in Beijing, China. The terrible secret Shan uncovers changes his town and his life forever.

"Edgar-winner Pattison remains without peer at integrating a fair-play whodunit into a searing portrayal of life under an oppressive and capricious regime. Even readers unfamiliar with the physical and cultural devastation China has wrought in Tibet will find themselves engrossed—and moved—by Pattison’s nuanced portrayal."—Publishers Weekly (starred boxed review)