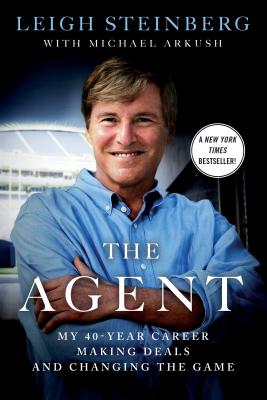 My 40-Year Career Making Deals and Changing the Game

The real-life "Jerry Maguire," superagent Leigh Steinberg shares his personal stories on the rise, fall, and redemption of his game-changing career in the high-stakes world of professional sports

Leigh Steinberg is renowned as one of the greatest sports agents in history, representing such All-Pro clients as Troy Aikman, Bruce Smith, and Ben Roethlisberger. Over one particular seven-year stretch, Steinberg represented the top NFL Draft pick an unheard of six times. Director Cameron Crowe credits Steinberg as a primary inspiration for the titular character in Jerry Maguire, even hiring Steinberg as a consultant on the film. Lightyears ahead of his contemporaries, he expanded his players' reach into entertainment. Already the bestselling author of a business book on negotiation, the original superagent is now taking readers behind the closed doors of professional sports, recounting priceless stories, like how he negotiated a $26.5 million package for Steve Young—the biggest ever at the time—and how he passed on the chance to represent Peyton Manning.

Beginning with his early days as a student leader at Berkeley, Steinberg details his illustrious rise into pro sports fame, his decades of industry dominance, and how he overcame a series of high-profile struggles to regain his sobriety and launch his comeback. This riveting story takes readers inside the inner circle of top-notch agents and players through the visionary career of Leigh Steinberg, the pre-eminent superagent of our time.


Praise For The Agent: My 40-Year Career Making Deals and Changing the Game…

“NFL crazies will eat this like snack food.” —Kirkus Reviews

“As detailed by super-agent Leigh Steinberg...possibly the most successful sports agent in history…the business of signing top sports talent is fraught with eccentricity.” —The New York Post

“A memoir by arguably the most influential agent in NFL history… the star power of Steinberg and his clients should create a healthy demand for this title.” —Booklist

“It's fashionable now, after the movie, for a lot of agents to talk about heart, but Leigh was the only one talking like that in 1993, when I began research.” —Cameron Crowe, director of Jerry Maguire on Leigh Steinberg

“There really is a Jerry Maguire. Only he's not some schlumpf struggling to make it on a wing and a prayer like Tom Cruise in the movie. . . . His name is Leigh Steinberg, and [he] also happens to be the pre-eminent sports agent of our time.” —San Francisco Examiner on Leigh Steinberg

“Many sought out Leigh and he easily could have concentrated his attention elsewhere, but he so believed in me and my future that he stuck with me…A man of integrity and foresight, Leigh emphasized empowering his clients in order that they not be manipulated nor taken advantage of, thereby transcending and supplanting the 'agent' stigma of the time. ” —from the Foreword by Hall of Fame quarterback Warren Moon on Leigh Steinberg

LEIGH STEINBERG founded his sports law practice in 1975 and has since represented over 150 professional athletes. Currently President and CEO of Steinberg Sports and Entertainment and an advocate for player safety, he contributes a weekly column to Forbes and The Huffington. The author of the bestselling books Winning With Integrity and The Agent, Steinberg lives in Newport Beach, CA.

MICHAEL ARKUSH has written several books, including The Fight of the Century, I Remember Payne Stewart, Tim Allen Laid Bare, Rush! and The Last Season.
Loading...
or support indie stores by buying on