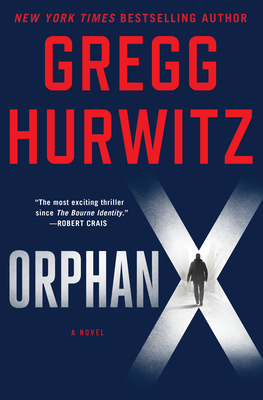 “The U.S. government secretly trained a group of orphaned children to be lethal assassins when they grew up. Evan, one of these children and now a grown man, has left the program and disappeared, resurfacing only to help those in desperate need. It is through this work that one of his enemies has found him, but which enemy - the government, one of his fellow orphans, or a relative of one of the many bad guys he has gotten rid of? Filled with lots of twists and turns and neat techno gadgets, Orphan X takes you on a roller coaster ride that will leave you breathless and waiting for the next installment of the Nowhere Man.”
— Nancy McFarlane (E), Fiction Addiction, Greenville, SC
View the List

Who is Orphan X?

The Nowhere Man is a legendary figure spoken about only in whispers. It’s said that when he’s reached by the truly desperate and deserving, the Nowhere Man can and will do anything to protect and save them. But he’s not merely a legend.

Evan Smoak is a man with skills, resources, and a personal mission to help those with nowhere else to turn. He’s also a man with a dangerous past. Chosen as a child, he was raised and trained as an Orphan, an off-the-books black box program designed to create the perfect deniable intelligence asset: An assassin. Evan was Orphan X—until he broke with the program and used everything he learned to disappear. But now someone is on his tail. Someone with similar skills and training who will exploit Evan’s secret new identity as the Nowhere Man to eliminate him.


Praise For Orphan X: A Novel…

“This isn't simply Hurwitz's 'best thriller yet' or 'a terrific new thriller'-Orphan X is an order-of-magnitude leap into stardom. It's the most exciting thriller I've read since The Bourne Identity. Fans of Jack Reacher, Mitch Rapp, and Jason Bourne will LOVE Evan Smoak, and the deadly, secret world of the Orphan Program. A new thriller superstar is born!” —Robert Crais

“What is Orphan X? A thrill-a-minute read with twists and turns galore. I'm looking forward to Evan Smoak's next adventure.” —Phillip Margolin

“Gregg Hurwitz's Orphan X is his best yet -- a real celebration of all the strengths he brings to a thriller.” —Lee Child

“From the explosive opening where a boy begins his dramatic transformation, Orphan X blows the doors off most thrillers I've read and catapults the readers on a cat-and-mouse chase that feels like a missile launch. Brilliantly conceived and plotted, his character Evan Smoak, Orphan X, deserves his own niche in the thriller hero hall of fame. Read this book. You will thank me later.” —David Baldacci

“Orphan X is the most exciting new series character since Jack Reacher. And Reacher would love this guy. A page-turning masterpiece of suspense enriched by compassion and insight.” —Jonathan Kellerman