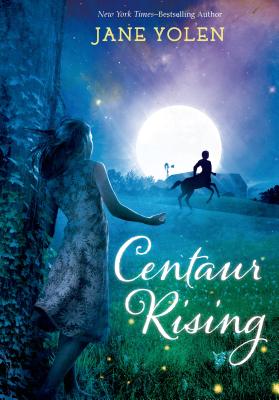 One night during the Perseid meteor shower, Arianne thinks she sees a shooting star land in the fields surrounding her family's horse farm. About a year later, one of their horses gives birth to a baby centaur. The family has enough attention already as Arianne's six-year-old brother was born with birth defects caused by an experimental drug—the last thing they need is more scrutiny. But their clients soon start growing suspicious. Just how long is it possible to keep a secret? And what will happen if the world finds out?

At a time when so many novels are set in other worlds, Jane Yolen imagines what it would be like if a creature from another world came to ours in this thoughtfully written, imaginative novel, Centaur Rising.

“*At a time when the publishing world could use something uplifting, Yolen is there with shooting stars, a child's hug, and a nuzzle of a horse's nose . . . Destined to become not only a popular book but one that stands the test of time.” —Booklist, STARRED REVIEW

Jane Yolen is one of the most distinguished and successful authors for young readers and adults in the country. She is the author of more than 200 books--including Briar Rose, Sister Light, Sister Dark, Owl Moon, and the immensely popular The Devil's Arithmetic. Her books have won awards including the Caldecott Medal, two Nebula Awards, the World Fantasy Award, the Jewish Book Award, and two Christopher Medals. SFWA named her the 2017 Damon KNIGHT MEMORIAL GRAND MASTER for her contributions to the literature of Science Fiction and Fantasy. She lives in Hatfield, Massachusetts.
Loading...
or support indie stores by buying on