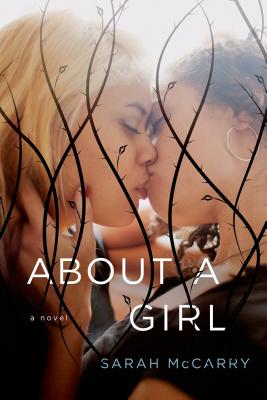 A Novel (The Metamorphoses Trilogy #3)

Eighteen-year-old Tally is absolutely sure of everything: her genius, the love of her adoptive family, the loyalty of her best friend, Shane, and her future career as a Nobel prize-winning astronomer. There's no room in her tidy world for heartbreak or uncertainty—or the charismatic, troubled mother who abandoned her soon after she was born. But when a sudden discovery upends her fiercely ordered world, Tally sets out on an unexpected quest to seek out the reclusive musician who may hold the key to her past—and instead finds Maddy, an enigmatic and beautiful girl who will unlock the door to her future. The deeper she falls in love with Maddy, the more Tally begins to realize that the universe is bigger—and more complicated—than she ever imagined. Can Tally face the truth about her family—and find her way home in time to save herself from its consequences?

About a Girl is the powerful and entrancing conclusion to Sarah McCarry's Metamorphoses trilogy.


Praise For About a Girl: A Novel (The Metamorphoses Trilogy #3)…

“Tally's growth throughout is palpable, and the language-whether describing sex or music or nightmares-is breathtaking. Fluid and aching, with a diverse cast and rich worldbuilding.” —Kirkus Reviews (starred review)

“The stunning, densely packed story is full of as much intoxicating poetry as meticulous scientific explanations. Tally's initial prim and rather academic narration becomes richer and more dreamlike as her story unfolds. This edgy, smart, and challenging title combines mythology, punk rock, science, a quest, feminism, art, dreams and the power of stories and storytelling with unforgettable results. The well-developed cast of characters is racially and sexually diverse. The emphasis on the importance of female relationships-as family, as lovers, and as friends-is a welcome exploration of the many levels of intimacy. A highly recommended and breathtakingly read for sophisticated readers.” —School Library Journal (starred review)

“As in other books in the trilogy, McCarry inflects the Pacific Northwest setting with Greek mythology, weaving ancient magic throughout Tally's story and adding an enchanting dose of magic realism. Tally's imagistic, melodic narrative roils with urgent emotion, and readers who loved the first two installments in the series will be richly rewarded by this series ender.” —Booklist

“Classic mythology runs through Sarah McCarry's tales...only now the Siren Song is a punk rock scream, the Jealous God lives in a Manhattan apartment, and the Lost Heroine has particle physics and cosmology to guide her home. About A Girl is fierce, surprising, sexy, and always intelligent.” —Meg Howrey, author of Blind Sight and The Cranes Dance

Sarah McCarry was born in Seattle. She is the recipient of a MacDowell Colony fellowship and has written for Glamour, The Stranger newspaper, the Huffington Post Books Blog, and Tor.com. She has published essays in Listen Up: Voices from the Next Feminist Generation (Seal Press) and Voices of a New Generation: A Feminist Anthology (Prentice Hall). Since 1999, she’s written and produced the zine Glossolalia; it’s currently in the permanent collections of libraries across the country, including Columbia University, Barnard College, the Multnomah County Public Library, and the San Francisco Public Library. In August of 2009 she started the personal blog www.therejectionist.com. The blog currently has over a thousand followers and gets over 20,000 hits a month. She has bicycled alone across two continents and worked as a domestic violence advocate, a circus performer, a clearcut surveyor, an archivist, and a letterpress printer. She lives in Brooklyn, New York. She is the author of All Our Pretty Songs, Dirty Wings, and About a Girl.
Loading...
or
Not Currently Available for Direct Purchase