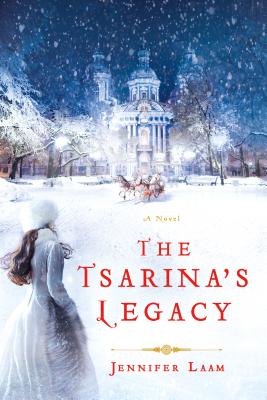 Then...Grigory "Grisha" Potemkin has had a successful long association with the powerful Empress Catherine of Russia. But Catherine and Grisha are older now and face new threats, both from powers outside of Russia and from those close to them. Haunted by the horrors of his campaign against the Muslim Turks, Grisha hopes to construct a mosque in the heart of the empire. Unfortunately, Catherine's much younger new lover, the ambitious Platon Zubov, stands in his way. Grisha determines that to preserve Catherine's legacy he must save her from Zubov's dangerous influence and win back her heart.

Now...When she learns she is the lost heiress to the Romanov throne, Veronica Herrera's life turns upside down. Dmitry Potemkin, one of Grisha's descendants, invites Veronica to Russia to accept a ceremonial position as Russia's new tsarina. Seeking purpose, Veronica agrees to act as an advocate to free a Russian artist sentenced to prison for displaying paintings critical of the church and government. Veronica is both celebrated and chastised. As her political role comes under fire, Veronica is forced to decide between the glamorous perks of European royalty and staying true to herself.

In Jennifer Laam's The Tsarina's Legacy, unexpected connections between Grisha and Veronica are revealed as they struggle to make peace with the ghosts of their past and help secure a better future for themselves and the country they both love.

Jennifer Laam earned her master’s degree in History from Oakland University in Michigan and her bachelor’s degree from the University of the Pacific in Stockton, CA. She has lived in Los Angeles and the suburbs of Detroit, traveled in Russia and Europe, and worked in education and non-profit development. She currently resides in Northern California. The Secret Daughter of the Tsar is her first novel.

Praise For The Tsarina's Legacy: A Novel…

"A legacy worth reading, The Tsarina’s Legacy is an exciting adventure waiting at one’s fingertips. Jennifer Laam has taken readers to new heights in her latest novel...A fast-paced and well-developed story that all must read." - San Francisco Book Review

"A vivid portrait of imperial Russia with lush historical detail, The Tsarina's Legacy is also a very timely and thought-provoking read. Jennifer Laam gives us another master class in intertwining two storylines that are separated by hundreds of years but inform one another in lovely, relevant, and surprising ways... An expertly crafted novel." - Alyssa Palombo, author of The Violinist of Venice