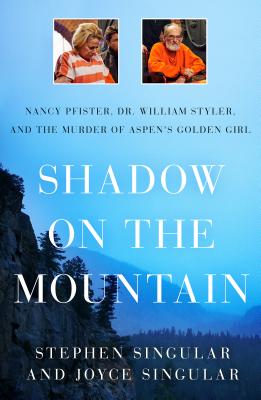 Shadow on the Mountain

Nancy Pfister, heir to Buttermilk Mountain, the world-renowned site of the Winter X Games, was Aspen royalty, its ambassador to the world. She lived among the rich and famous: she partied with Hunter S. Thompson, dated Jack Nicholson, had a joint baby shower with Goldie Hawn, and globetrotted with Angelica Houston. She was also a philanthropist, admired for her generosity. But behind the warm façade, she could be selfish, manipulative, and careless. Pfister enjoyed bragging about her wealth and celebrity connections, but those closest to her, like Kathy Carpenter, Pfister's personal assistant, drinking companion, and on one occasion lover, knew better.

In 2013, after a long fall from grace, Dr. William Styler and his wife, Nancy, relocated to Aspen to reinvent themselves. They'd lived the high life before a misguided lawsuit left them near poverty, and Nancy Pfister was their answered prayer. She took them in, gave them a place to live, and allowed them to launch their new spa business. Everything seemed perfect until Pfister turned on them, making increasingly irrational demands and threatening to throw them out on the street.

When Nancy was found beaten to death in her own home, the Stylers and Carpenter were all under suspicion for the gruesome murder. But in this close-knit, wealthytown set on keeping its reputation and secrets safe from the public eye, the police struggled to solve the mystery of what really happened.

Stephen Singular is a New York Times bestselling author of many books, including Shadow on the Mountain, A Death in Wichita, and When Men Become Gods. His book Talked to Death was nominated for an Edgar Award and made into the Oliver Stone film Talk Radio. Singular has appeared on Larry King Live, Good Morning America, Court TV, and Anderson Cooper 360.

Joyce Singular is an author and a collaborator on a number of books with her husband, including Shadow on the Mountain, adding a female perspective on the nature of crime. They live in Denver, Colorado.
or
Not Currently Available for Direct Purchase