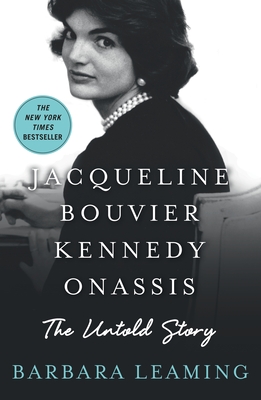 "An intimate and revealing look at one of the twentieth century's most remarkable—and misunderstood women." —KIRKUS REVIEWS

Jacqueline Bouvier Kennedy Onasis: The Untold Story is the first book to document Jackie's thirty-one-year struggle with posttraumatic stress disorder (PTSD). Here is the woman as she has never been seen before. Barbara Leaming explores the seemingly magical world of Jackie's youth, her fairy-tale marriage to a wealthy and handsome senator and presidential candidate and her astonishing transformation into a deft political wife and unique First Lady. This spirited young woman's rejection of the idea of a "safe marriage" as the wife of some socially prominent but utterly predictable man led her to JFK and, in time, international fame. But the trauma of her husband's murder would damage her far more than has been known. Until now.

While the life of Jacqueline Bouvier Kennedy Onassis has been examined and scrutinized countless times, it is only now that we can truly understand the woman behind the facade, the untold story of this iconic woman.

“Provocative… Recast in this light, Jackie's post-1963 actions make a new kind of sense… With a diagnosis of PTSD in mind, incidents once criticized as selfish or at least self-indulgent can be reassessed.” —USA Today

“Jacqueline Bouvier Kennedy Onassis provides suggestive evidence that her subject suffered from the clinical symptoms of post-traumatic stress disorder, or PTSD, including flashbacks, insomnia, numbness, avoidance, fear, depression, and anger. … Her documentation -- which includes Jackie's remarks to intimates, as well as her behavior -- is compelling. Interpreting the post-assassination life through the lens of PTSD turns out to be a fruitful way of making sense of Jackie's sometimes odd-seeming choices.” —The Boston Globe