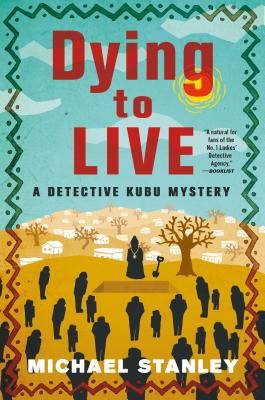 Michael Stanley's Dying to Live is the sixth crime novel to feature the humble and endearing Detective Kubu, set against the richly beautiful backdrop of Botswana.

A Bushman is discovered dead near the Central Kalahari Game Reserve in Africa. Although the man looks old enough to have died of natural causes, the police suspect foul play, and the body is sent to Gaborone for an autopsy. Pathologist Ian MacGregor confirms the cause of death as a broken neck, but is greatly puzzled by the man’s physiology. Although he’s obviously very old, his internal organs look remarkably young. He calls in Assistant Superintendent David “Kubu” Bengu. When the Bushman’s corpse is stolen from the morgue, suddenly the case takes on a new dimension.


Praise For Dying to Live: A Detective Kubu Mystery…

Praise for Dying to Live:

"David “Kubu” Bengu, an assistant superintendent in the Botswana CID, investigates a particularly baffling murder in his sixth, and best, outing. Stanley (the pseudonym of Michael Sears and Stanley Trollip) keeps the intriguing plot twists coming."—Publishers Weekly (starred and boxed)

"Stanley once again mixes strongly developed characters, puzzling plot twists, and a textured African setting in an international police procedural with heart and soul that will appeal to fans of Kwei Quartey and Alexander McCall Smith."—Library Journal (starred)

"The best yet, with both an ingenious mystery and a deeper and more textured depiction of modern Botswana and Kubu's piece of it."—Kirkus

Praise for A Death in the Family:

“This fifth mystery featuring Detective Kubu is another fast moving procedural notable for its warm characterizations and vivid sense of place. A natural for fans of the No. 1 Ladies' Detective Agency.” —Booklist

"Stanley and Kubu deserve much more critical and commercial attention than they have been receiving; hopefully this latest installment will rectify that shortcoming." —Bookreporter

"If you love Alexander McCall Smith's The No. 1 Ladies' Detective Agency books, are you going to like Michael Stanley's Detective Kubu? Chances are very good that you will." —Kitlling: Books

Praise for The Detective Kubu series:

"Readers may be lured to Africa by the landscape, but it takes a great character like Kubu to win our loyalty."—New York Times Book Review

"Impossible to put down. Kubu's painstaking detecting skills make him a sort of Hercule Poirot of the desert. . . . This series can be recommended to a wide gamut of readers." —Library Journal (starred review)

“Under the African sun, Michael Stanley’s Detective Kubu investigates crimes as dark as the darkest of Nordic Noir. Call it Sunshine Noir, if you will—a must read.” —Yrsa Sigurdardottir, internationally bestselling author

MICHAEL STANLEY is the writing team of Michael Sears and Stanley Trollip.

Sears was born in Johannesburg, grew up in Cape Town and Nairobi, and teaches at the University of the Witwatersrand.

Trollip was also born in Johannesburg and has been on the faculty of the universities of Illinois, Minnesota, and North Dakota, and at Capella University. He divides his time between Knysna, South Africa and Minneapolis, Minnesota.

Michael Stanley is the author of the Detective Kubu Mystery series, including A Death in the Family and Dying to Live.