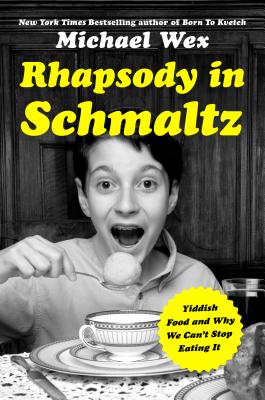 Yiddish Food and Why We Can't Stop Eating It

Bagels, deli sandwiches and gefilte fish are only a few of the Jewish foods to have crossed into American culture and onto American plates. Rhapsody in Schmaltz traces the history and social impact of the cuisine that Yiddish-speaking Jews from Central and Eastern Europe brought to the U.S. and that their American descendants developed and refined. The book looks at how and where these dishes came to be, how they varied from region to region, the role they played in Jewish culture in Europe, and the role that they play in Jewish and more general American culture and foodways today.

Rhapsody in Schmaltz traces the pathways of Jewish food from the Bible and Talmud, to Eastern Europe, to its popular landing pads in North America today. With an eye for detail and a healthy dose of humor, Michael Wex also examines how these impact modern culture, from temple to television. He looks at Diane Keaton's pastrami sandwich in Annie Hall, Andy Kaufman's stint as Latke on Taxi and Larry David's Passover seder on Curb Your Enthusiasm, shedding light on how Jewish food permeates our modern imaginations.

Rhapsody in Schmaltz is a journey into the sociology, humor, history, and traditions of food and Judaism.


Praise For Rhapsody in Schmaltz: Yiddish Food and Why We Can't Stop Eating It…

“Mouth-watering and eye-opening in equal measure – Rhapsody in Schmaltz is essential reading for anyone who has shmeared a bagel, trifled with trayf, or hunted the Afikomen.” --Ben Schott, author of Schott’s Original Miscellany

“Wex proves once again in Schmaltz that he is Yiddish culture's equivalent of his titular fat; a salve, a balm, the heart, soul, and very tam of the edible delicacies and their origins that he chronicles here. Not since the Rascal House menu was last printed has there been a finer assembly of words on Jewish food upon the page.” --David Sax, author of Save the Deli: In Search of Perfect Pastrami, Crusty Rye, and the Heart of Jewish Delicatessen

“Only Wex can write an insightful, witty read on the history of Jewish food and its ingredients. According to Leviticus ‘all the fat is the Lord's.’ Lately I think my butcher has been giving me too much of God's share.” --Ziggy Gruber, Owner of Kenny & Ziggy’s New York Delicatessen

"Most Jews have a lot (sometimes too much) to say about Jewish food. But few say it with Michael Wex's mix of insider's wisdom, great appetite, and even greater humor. Rhapsody in Schmaltz is a masterful work, one I'll turn to over and over for both historical reference and a hearty chuckle." --Leah Koenig, author of Modern Jewish Cooking

“I'm typing this blurb with a hot glass of tea and a pletzel to the right of me, so I need to make this quick. Wex has given us a learned examination of the religious whys and wherefores of the food found in North American Polish-Jewish homes (like mine and his) through the 1960s. There are not a few wise cracks mixed in, like onions in kreplach, with all the scholarship. Wex more or less does for kugel what Knausgaard has done for lutefisk.” --Stuart Rojstaczer author of The Mathematician's Shiva

"A rare combination of erudition and wit – an irreverent romp through the highs and lows of Yiddish food by a yeshiva boy gone rogue." --Barbara Kirshenblatt-Gimblett, Chief Curator, POLIN Museum of the History of Polish Jews

"Chicken, Kishke, Cholent and Matzoh have dominated the Yiddish menu and kept it in virtual bondage for hundreds of years. Rhapsody in Shmaltz tells the true story behind these fetishized dishes and gives us what Yiddish, no stranger to pain, calls Essen Emes." --Adeena Karasick, author of Amuse Bouche: Tasty Treats for the Mouth

"An enticing tour of Judaism's culinary past. Wex (How to Be a Mentsh (and Not a Shmuck), 2009, etc.) brings lighthearted humor and his considerable expertise on Jewish culture to a wide-ranging look at Jewish food, from biblical dietary restrictions to New York bagels. An informative, merrily entertaining culinary and cultural history." --Kirkus

Michael Wex is a novelist, professor, translator (including the only Yiddish translation of The Threepenny Opera), lecturer, and performer. He's been hailed "a Yiddish national treasure" and is one of the leading lights in the current revival of Yiddish, lecturing widely on Yiddish and Jewish culture. He lives and shmoozes in Toronto.
Loading...
or support indie stores by buying on