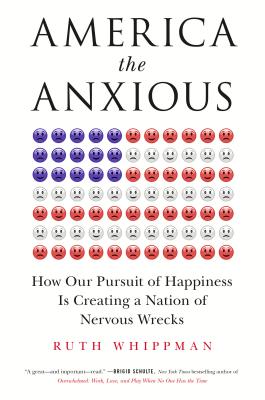 "I don't think I've enjoyed cultural observations this much since David Foster Wallace's A Supposedly Fun Thing I'll Never Do Again. Reading this book is like touring America with a scary-smart friend who can't stop elbowing you in the ribs and saying, "Are you seeing what I'm seeing?!" If you want to understand why our culture incites pure dread and alienation in so many of us (often without always recognizing it), read this book." —Heather Havrilesky, writer behind "Ask Polly" for New York Magazine and nationally bestselling author of How to Be a Person in the World

Are you happy? Right now? Happy enough? As happy as everyone else? Could you be happier if you tried harder?

After she packed up her British worldview (that most things were basically rubbish) and moved to America, journalist and documentary filmmaker Ruth Whippman found herself increasingly perplexed by the American obsession with one topic above all others: happiness. The subject came up everywhere: at the playground swings, at the meat counter in the supermarket, and even—legs in stirrups—at the gynecologist.

The omnipresence of these happiness conversations (trading tips, humble-bragging successes, offering unsolicited advice) wouldn’t let her go, and so Ruth did some digging. What she found was a paradox: despite the fact that Americans spend more time and money in search of happiness than any other nation on earth, research shows that the United States is one of the least contented, most anxious countries in the developed world. Stoked by a multi-billion dollar “happiness industrial complex” intent on selling the promise of bliss, America appeared to be driving itself crazy in pursuit of contentment.

So Ruth set out to get to the bottom of this contradiction, embarking on an uproarious pilgrimage to investigate how this national obsession infiltrates all areas of life, from religion to parenting, the workplace to academia. She attends a controversial self-help course that promises total transformation, where she learns all her problems are all her own fault; visits a “happiness city” in the Nevada desert and explores why it has one of the highest suicide rates in America; delves into the darker truths behind the influential academic “positive psychology movement”; and ventures to Utah to spend time with the Mormons, officially America’s happiest people.

What she finds, ultimately, and presents in America the Anxious, is a rigorously researched yet universal answer, and one that comes absolutely free of charge.


Praise For America the Anxious: How Our Pursuit of Happiness Is Creating a Nation of Nervous Wrecks…

“A travelogue narrated by a curious, funny and highly motivated guide...[and] put together, the snapshots add up to an uncomfortable picture of American life. Whippman successfully dismantles some of the major happiness studies and convinces us that the emphasis on personal happiness takes the pressure off, say, the social welfare system to actually help people to improve their lives.” —The New York Times Book Review

“Ruth Whippman is my new favorite cultural critic, and her book was such a joy to read that I temporarily forgot about all my neuroses. It’s a shrewd, hilarious analysis of why a country obsessed with happiness is so darn unhappy.” —Adam Grant, New York Times bestselling author of Give and Take, Originals, and Option B (coauthored with Sheryl Sandberg)

"Ruth Whippman is whip-smart, her writing is nothing short of genius." —Ira Israel, The Huffington Post

"A witty look at our national obsession with happiness. Full of personal anecdotes and insider dish from visits to 'fungineering' companies that persuade employees that long hours make you happier, it's an entertaining and insightful read." —Good Housekeeping

“Why does a nation so infatuated with happiness seem so discontent? After combing through the scientific literature, [Whippman] proposes an answer… Her cheeky, outsider observations and self-deprecating humor make for an engaging read.” —Scientific American Mind

"A whip-sharp British Bill Bryson.... In this funny yet unsettling book...like Bill Bryson, Whippman has a willingness to play up cultural differences to comic effect. She also has Bryson's sharp ear for language and it's potential for absurdity.... This is not merely a personal voyage of enlightenment, however, nor an extended eye-roll at wacky Americans. The book’s serious underpinning is a warning about how happiness is being weaponized by governments and employers, directed towards their people to make them work harder and longer.... With warm wit and chilling logic,America the Anxious shows that the human desire for contentment can be manipulated and distorted until it is barely recognizable." —The Sunday Times (UK)

"A hilarious narrative full of barbed observations, personal anecdotes, and comical stories. After putting the book down, readers may well agree with the author that if we want to be happy, what we really need to do is stop chasing after happiness and focus on living fuller lives. A delightfully witty, enjoyable read.” —Kirkus

“An amusing and enlightening expose of the American cultural push for happiness.... Made me laugh out loud.... The overall thesis of Whippman’s book is an important one.” —UC Berkeley, Greater Good Science Center

“[Whippman’s] witty, insightful observations are supported by convincing data, as she pulls back the curtain to reveal the seedy side of the business of happiness. Recommended to readers interested in the psychology of happiness or anxiety and especially those looking for an alternative to the multitude of ‘how-to’ books on the subject.” —Library Journal

“An outstanding revelation of how Emoticon America seeks happiness...With humor, intelligence and facts, Whippman’s compassionate and definitive research reads like a novel; she is fascinating, brilliant and…right on! One of the best reads on our national obsession with the non-reality of chasing happiness, America the Anxious is unputdownable!” —The Review Broads

“…fun to read. The observations are witty and humorous without being mean-spirited, as well as honest. It has the voice of both a travelogue and an investigation…” —Motherhood Moment

"Ruth Whippman captures the absurdity of our late capitalist moment with sharp, insightful prose and a wicked sense of humor that makes every single page a pure joy to read. America the Anxious not only entertains without fail, but it also offers a wealth of devastating insights into how our culture demands happiness of us in ways that only seem to make us miserable. I mostly hate "Let Me Show You America!" nonfiction tomes, but this book is so charming and hilarious, I don't think I've enjoyed cultural observations this much since David Foster Wallace's A Supposedly Fun Thing I'll Never Do Again. Reading this book is like touring America with a scary-smart friend who can't stop elbowing you in the ribs and saying, "Are you seeing what I'm seeing?!" If you want to understand why our culture incites pure dread and alienation in so many of us (often without always recognizing it), read this book." —Heather Havrilesky, writer behind "Ask Polly" for New York Magazine and nationally bestselling author of How to Be a Person in the World

“Perhaps it takes the wry and often hilarious observations of an inquiring outsider to bring into sharp focus the absurdity of modern America’s near obsessive pursuit of Happiness with a capital H, which is instead making so many of us so miserable. British writer Ruth Whippman takes readers on an engaging and perceptive personal romp through the $10 billion happiness industry, and, along the way, shreds much of the ‘science’ that happiness is both an individual responsibility and a solo endeavor, and, thankfully, calls for restoring the ideal that true happiness is about the depth of our social connections, about meaning, and, ultimately, about justice for all. A great—and important—read.” —Brigid Schulte, award-winning journalist and author of the New York Times bestselling Overwhelmed: Work, Love & Play When No One Has the Time

"One of the best books I’ve come across in a long time.... The book is insightful, brilliant, funny (actually laugh-out-loud hilarious at times), timely, and thought-provoking. It’s also based on some very thorough and sound research. I highly recommend it to anyone looking for a great and relevant non-fiction read." —Hal Urban, author of Life's Greatest Lessons: 20 Things That Matter

“Ruth Whippman cuts to the heart of America's obsession with happiness and the strange and wonderful things we do to obtain it. America the Anxious is a funny, timely book that everyone should read.” —Jessica Valenti, author of Full Frontal Feminism and Sex Object

“I LOVED this book. I found it SO WELL WRITTEN, so witty and funny that reading it I was often envious of Ruth Whippman’s facility with language. It was a hugely engaging read, accessible and so relevant.... I loved the fact that she anchored her research in her own life and the case studies were utterly fascinating! The Mormons! The funny town in Vegas! It’s a great book. It really needs to be read because people are going about happiness all the wrong way. I really really really really enjoyed it and am quite evangelical about it.” —Marian Keyes, New York Times and USA Today bestselling author of Sushi for Beginners

“Ruth Whippman has written a laugh-out-loud examination of how, exactly, the American pursuit of happiness has led us so far astray. With insight and intellect, she tracks the peculiar American obsession with happiness from yoga classes in Berkeley to the wilds of Silicon Valley and corporate-sponsored mindfulness seminars. The true value in this book—beyond Whippman’s considerable wit—is its celebration of the complexity of human emotion and connection. Whippman brings a fresh perspective to American culture that is almost impossible to find in today’s positivity-at-all-costs ethos. America the Anxious is a vibrant, hilarious, necessary book.” —Tara Conklin, New York Times bestselling author of The House Girl

“If you’re on a quest for happiness, you want to start with buying this book. Wit, wisdom, and the kind of analysis only a Brit could bring to the topics of anxiety and contentment. And the book itself will make you happy: I laughed my way through it. Highly recommended.” —Linda Tirado, author of Hand to Mouth: Getting By in Bootstrap America

“Ruth Whippman manages the trick of being funny about what is, deep down, a serious problem: the American quest for happiness isn’t working. The more we focus on making ourselves happy, the more anxious we become—and the pursuit of wellbeing becomes just another stressful competition. Yet there’s no need to despair, she suggests: there's a far more promising path to fulfillment in the equally American traditions of community, solidarity, and solving our problems together.” —Oliver Burkeman, Guardian columnist and author of The Antidote: Happiness for People Who Can't Stand Positive Thinking

“With the gimlet eye of an outsider, Ruth Whippman illustrates persuasively and hilariously, again and again, how seeking happiness as an elusive end goal is making us frantic, miserable, and blind to things that might actually make us happy... For anyone who has fallen prey to a book promising the secret of a happy life, and then failed to feel any happier, THIS book, by Whippman, might just provide the answers you didn't even know you were seeking.” —Malena Watrous, author of If You Follow Me

RUTH WHIPPMAN is a British writer, journalist, and documentary maker living in the United States. Her essays and comment pieces have appeared in various publications including the New York Times, The Independent, The Guardian and the Huffington Post. She graduated from Cambridge University and now lives in California, where she is the proud mother of two little boys.
Loading...
or
Not Currently Available for Direct Purchase