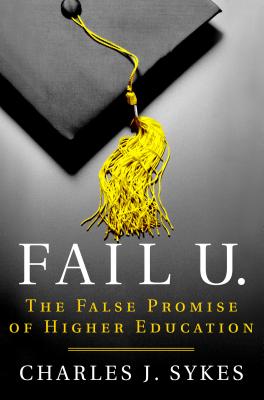 The False Promise of Higher Education

The cost of a college degree has increased by 1,125% since 1978—four times the rate of inflation. Total student debt has surpassed $1.3 trillion. Nearly two thirds of all college students must borrow to study, and the average student graduates with more than $30,000 in debt. Many college graduates under twenty-five years old are unemployed or underemployed. And professors—remember them?—rarely teach undergraduates at many major universities, instead handing off their lecture halls to cheaper teaching assistants.

So, is it worth it? That’s the question Charles J. Sykes attempts to answer in Fail U., exploring the staggering costs of a college education, the sharp decline in tenured faculty and teaching loads, the explosion of administrative jobs, the grandiose building plans, and the utter lack of preparedness for the real world that many now graduates face. Fail U. offers a different vision of higher education; one that is affordable, more productive, and better-suited to meet the needs of a diverse range of students—and one that will actually be useful in their future careers and lives.

Praise For Fail U.: The False Promise of Higher Education…

"With telling statistics and piquant anecdotes...[Fail U. is] certain to stimulate a much-needed debate." --Booklist

"This is a book for our times and one of its most vexing problems."--Jack Fowler, Publisher, National Review

“Fail U. stirs the higher education pot at a timely moment, raising a number of important issues for consideration by both academics and the general public.” –New York Journal of Books