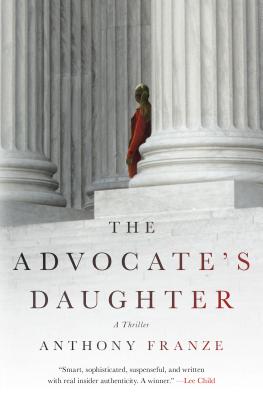 A Washington, D.C., lawyer and frequent major media commentator on the Supreme Court, Anthony Franze delivers a high-stakes story of family, power, loss, and revenge set within the insular world of the highest court in our country.

Among Washington, D.C., power players, everyone has secrets they desperately want to keep hidden,including Sean Serrat, a Supreme Court lawyer. Sean transformed his misspent youth into a model adulthood and now has one of the most respected legal careers in the country. But just as he learns he's on the short list to be nominated to the U.S. Supreme Court, his daughter, Abby, a talented and dedicated law student, goes missing. Abby's lifeless body is soon found in the library of the Supreme Court, and her boyfriend, Malik Montgomery, a law clerk at the high court, is immediately arrested. The ensuing media frenzy leads to allegations that Malik's arrest was racially motivated, sparking a national controversy.

While the Serrat family works through their grief, Sean begins to suspect the authorities arrested the wrong person. Delving into the mysteries of his daughter's last days, Sean stumbles over secrets within his own family as well as the lies of some of the most powerful people in the country. People will stop at nothing to ensure that Sean never exposes the truth.

An excerpt of Franze's new legal thriller The Outsider, coming out this March, is now available at the end of The Advocate's Daughter ebook.

"[The Advocate's Daughter] deals with legal issues ripped from the front pages...a strong family and legal drama...entertaining." - Above the Law

"“This is an impossible business to predict, but as a person and a writer Franze seems to have that little bit extra – whatever it is that makes the difference. Certainly ‘The Advocate’s Daughter’ came out a cut above. With a bit of luck, Franze should be around for a long time – which will be good for readers and his fellow writers, too." - Lee Childs, from an interview with the Detroit Legal News

“I haven’t read a legal thriller this good in a long time . . .There are a lot of variables in this story and the pacing is relentless, making this an all nighter for me. The characters are well developed and the family scenes especially rang true. And I loved all the details about the Supreme Court, a place most of us don’t know much about (and be sure to read the notes at the end, but only after you read the book!) This book put me in mind of The Tenth Justice by Brad Meltzer, his first book and still one of my favorite legal thrillers ever. Franze is in excellent company here and I look forward to more from this author.” - Bookbitch

“Enlightening…The mystery grows thick and dark, but the book’s major appeal lies in sorting out the real stuff about the court from the hectic fiction.” - The Toronto Star

"A gripping tale of politics, law and secrets, “The Advocate’s Daughter” displays Franze’s expertise as a Washington lawyer and commentator on the high court. As he weaves a stunning story that makes “House of Cards” look like “Little House on the Prairie,” readers of all ideological stripes will find it a splendid tale of grief and grievance, crime and corruption, power and perfidy." - The Richmond Times-Dispatch

"Lawyers by trade are storytellers, and good lawyers tell good stories — Franze’s book is a case in point." - LA Review of Books