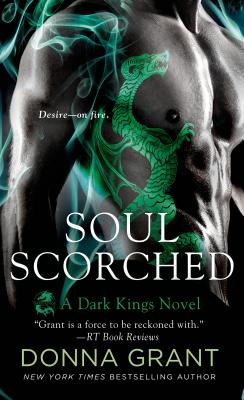 Darcy was floating on a cloud of pure passion. Everywhere he touched, Warrick was leaving a mark on her, forever changing her. She could feel it through her skin and muscle, through bone and into her soul. It was as if he was changing her. And she welcomed it…
Her power is a blessing.
Born on the Isle of Skye, Darcy is a beautiful woman of many gifts. Fortune-telling is her forte, and she remains the only Druid who could unlock the secrets—and desires—of a Dragon King. His name is Warrick. And now that Darcy's seen into his dragon heart, nothing will ever be the same…
His passion is a curse.
Warrick never intended to put Darcy in harm's way. But ever since she revealed a shocking truth, Darcy has been hunted by the Dark Fae, who want to use her powers for their own evil purposes. Now it's up to Warrick to do whatever it takes to keep the woman who sets his soul on fire safe. But protecting Darcy means putting himself—and his entire race—in jeopardy. Is his desperate longing for one woman worth the risk of losing everything…for eternity? Dive into Soul Scorched, the sizzling next novel in the Dark Kings series from New York Times bestselling author Donna Grant.